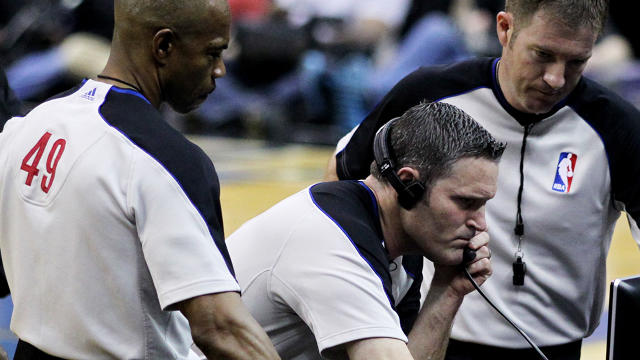 When anyone makes a mistake, they should be held accountable for that mistake, right? Yet the National Basketball Referees Association seems to disagree with that premise, calling for the end of Last Two Minute reports, or L2M reports for short.

L2M reports, according to the NBA website, contain assessments of calls NBA referees made, or didn’t make, “in the last two minutes of games decided in regulation that were within five points at the two-minute mark,” and also “include plays from the last two minutes and overtime of OT games.” Instituted last March, the reports are meant to provide transparency on officiating, something the NBRA apparently does not want.

In a statement released on Tuesday, the NBRA demanded the policy be abolished, arguing that transparency “does nothing to change the outcome of the game” and “encourages anger and hostility towards NBA officials.”

Of course honesty induces impassioned responses if the referees are not calling the game correctly! And while the outcome of the game is not changed by the L2M reports, the reports exist to document what the officials did right as well as wrong, providing examples of what to do or don’t in similar situations down the road.

The NBRA went on to say, “Efforts to promote transparency have encouraged the idea that perfection in officiating is possible. Perfection is neither possible nor desirable; if every possible infraction were to be called, the game would be unwatchable and would cease to exist as a form of entertainment in this country.”

Do the officials take any pride in their jobs? Shouldn’t you always strive for perfection in whatever you’re doing, no matter if it’s actually possible? The L2M reports offer a level of accountability in an effort to help the referees improve their overall performance on the court and ensure the NBA is entertaining, not frustrating.

To their credit, the NBRA’s appeal contained reasonable requests if the NBA continues the L2M reporting, such as increasing transparency on how the reports are compiled, consistent interpretation of the rules, and establish an appeals process. Such measures seem logical, encouraging accountability within the accountability.

The NBA was quick to shut down any potential of a referee coup, releasing a statement through league spokesman Mike Bass, which appears below:

Hopefully we continue to see strides within the NBA and other professional leagues towards improving how sports are officiated and how decisions are explained to the fans.