It should come as no surprise to anyone who knows the bubble that “journalists” in certain parts of California, New York and Washington D.C. live in that they would give a laughable award to an undeserving news outlet for a completely biased display in which opposing political thought was put on trial for the entire country to see.

The University of Southern California’s (USC) Annenberg School for Communication and Journalism, also known as the Norman Lear Center, gave one of their 2019 Walter Cronkite Award for Excellence in Television Political Journalism participation trophies to CNN for their ridiculous hit job on conservative commentator Dana Loesch and the National Rifle Association (NRA) of which Loesch is a spokeswoman.

According to the Lear Center’s press release about the award:

CNN Parkland Town Hall, a two-hour special, aired only seven days after 17 students and teachers were murdered by a gunman at Marjory Stoneman Douglas High School. In this “compelling and powerful” forum, moderator Jake Tapper deftly gave generous space to speak to gun control advocates, politicians, Parkland students, parents and a representative from the NRA. The program helped “advance the national conversation on gun control and violence,” the jury said.

This award shouldn’t be taken seriously, because if that event is what the Annenberg School thinks constitutes “journalism,” then they appear to show their lack of comprehension about what journalism actually is — or should I say was.

Of course, one of the indoctrinators that determines who wins these yearly awards at least gave a little bit of truth as to why awards were given to clearly biased reporting that was passed for journalism.

“If the press is the ‘enemy of the people,’” said professor Marty Kaplan, director of USC’s Norman Lear Center, which administers the award, “then being on this ‘enemies’ list is a badge of honor for these exceptional journalists.”

So this year's award are really about being against President Donald Trump and anyone associated with him? If this isn’t a crystal clear indication as to how these “journalists” feel about objective reporting, I don’t know what is. CNN seemingly used a legitimate tragedy and the people involved to push their own far-left policy dreams of getting rid of the Second Amendment.

Loesch was about to let CNN win this fake cake of an award and eat it too. The nationally syndicated host of “The Dana Show” posted multiple tweets, with video, of how despicably she was treated during this clear setup masquerading as a town hall.

Here are some of her posts describing the hit job: 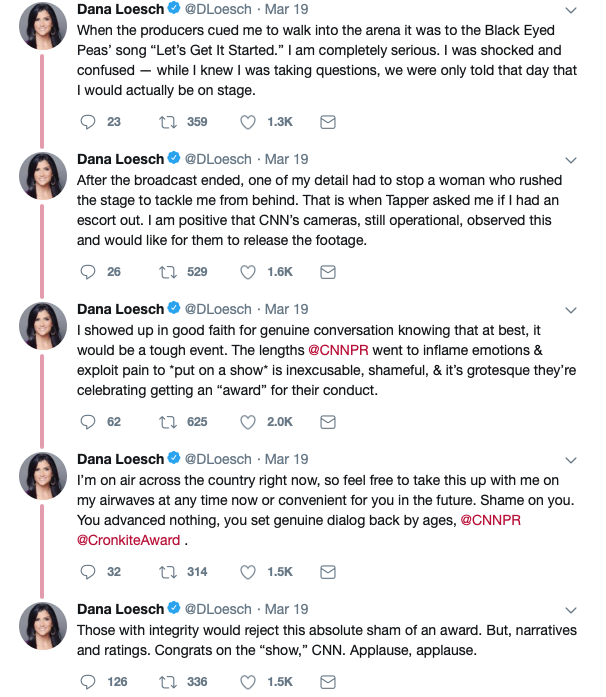 Absolutely awful! Some of her posts included video of the majority of the audience loudly chanting “shame on you” while certain individuals called for the burning of Loesch.

CNN getting an award for staging what eventually amounted to propaganda, as well as a public shaming by a deliberately-riled-up-by-CNN angry mob, is tantamount to a vegetarian winning an award for a beef eating contest. It just doesn’t make sense. Then again, when do the people living in the aforementioned bubble ever do?

Annenberg School for Communication and Journalism