Monday, I wrote a piece explaining how the Democratic Iowa Caucus process differs from that of the GOP. In my research, I discovered that in a situation in which the candidates are tied but there is an odd number of delegates, the winning candidate is decided by a coin toss.

I was under the impression that this was a rare phenomenon. I was proven wrong in my assumption last night.

With Democratic candidates Hillary Clinton and Bernie Sanders in a virtual tie across the state, six different precincts found themselves facing this very situation. In each of the six situations, a coin was tossed to determine who would be awarded the extra delegate. In what is a statistically improbable result, Hillary Clinton won all six of the coin flips.

Statistically speaking, the chances of this happening are 1 in 64.

In our culcutre, coin tosses are best known for deciding which team picks who receives the ball at the opening of a football game. But in this case, it may have actually decided which candidate won the first-in-the-nation caucus.

Each coin flip gave a delegate to Hillary Clinton. The most recent delegate count has Clinton with 699.57 delegates and Sanders with 695.49. Had Sanders only won half of those tosses, the tally would have been Sanders: 698.49; Clinton: 696.57.

It is highly unlikely that Clinton supporters filled caucus precinct captains' pockets with double-sided coins, so we probably shouldn't get all conspiratorial on this one. But if you're one of those people who believes that the Democratic caucus process is needlessly complicated and should be streamlined, this could be a good argument for bringing it into the 21st century. 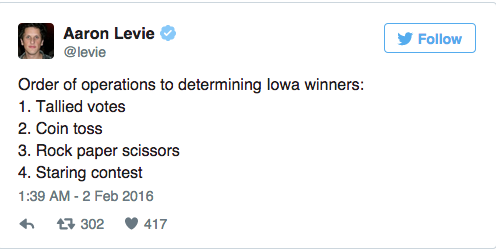