Despite Threats of Violence Against Them, FCC Did the Right Thing Dropping Bogus 'Net Neutrality'

Many Americans, and some from beyond the US, such as collectivist George Soros, are angry that the Federal Communications Commission (FCC) Thursday dropped its so-called “Net Neutrality” rule over Internet Service Providers (ISPs), thus allowing providers to ask big companies that use more bandwidth to pay more for faster service.

Such an alien concept.

Imagine, people being allowed by the state to charge more for faster service. How dare they? 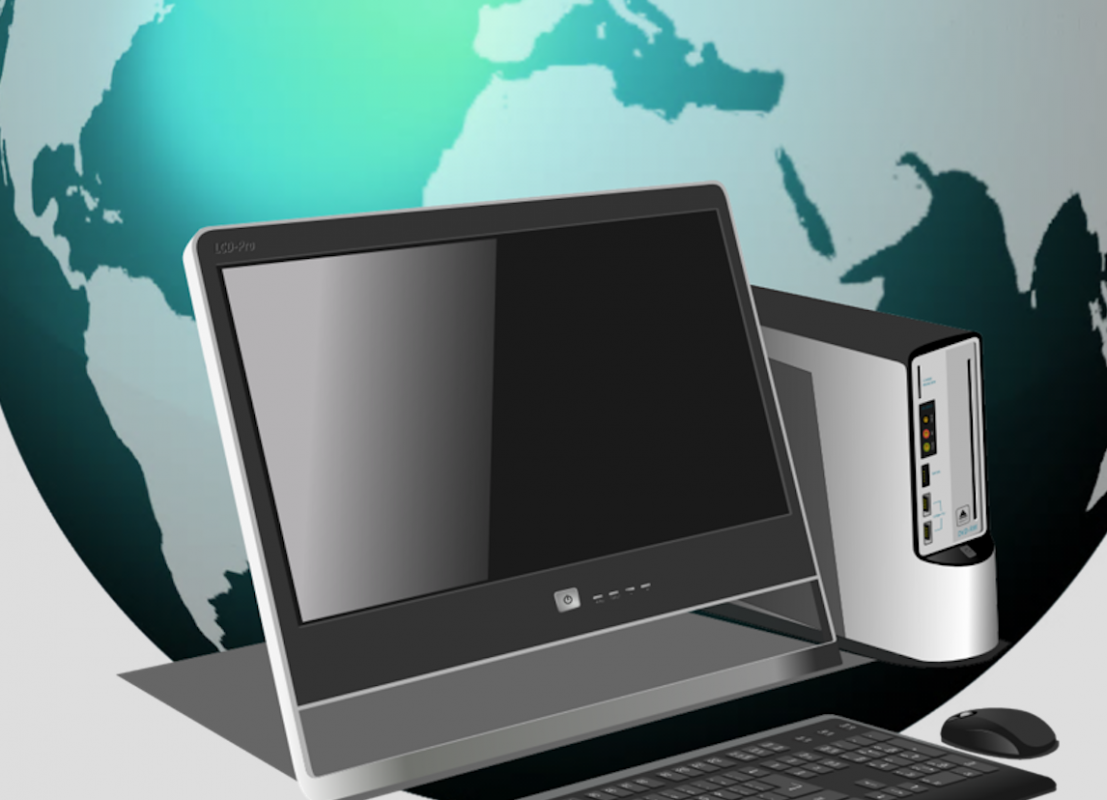 After all, we all know that prior to the misleadingly-titled “Net Neutrality” imposition way, way back in 2015, the internet was a primordial world where only the rich got service, and poor people were left to stare at cave walls and shadow puppets.

That was the kind of false narrative upstanding people like then-Senator Ted Kennedy sounded about the future of the internet if the FCC didn’t impose a one-size-fits-all, public utility style, command-and-control fascist boot onto the ever growing and ever more diverse internet  market. And, shoot, everyone knows what a paladin of the average guy Mr. Kennedy was…

But there is much more to the story, so, ethically and economically, it's worth asking supporters and detractors of Net Neutrality some fundamental questions:

For example... If a restaurateur wants to offer faster service to potential customers, and asks a higher price for it, is that bad? Is it immoral? No one is forcing people to eat at that restaurant, even though food is essential for life and is much more essential than cable or wifi… Why not leave food vendors to adjust their prices upward when they work to speed up services? Some consumers might want the faster food at higher prices, while others might opt for slower service at lower prices. Consumers can come and go as they wish based on their preferences.

They won’t have a financial incentive to offer faster service. They won’t invest in the research and development to do better. They won’t be allowed to compete against like-minded others trying to do the same thing at that higher price level, and, thus, they won’t bring about new technologies, and the price of the best tech won’t decrease as rapidly as it would under a truly competitive system. The ability for prices to rise based on increased demand, decreased availability, or increased quality is essential to send signals to potential start-ups that would enter the market to get a portion of that market share. It's supply and demand, and it's just one of numerous factors to remember in order to come to a large-view understanding of why the malignant government power-grab called “Net Neutrality” is a very, very bad idea.

The fact that there is nothing in the US Constitution that gives the federal government the power to threaten ISPs, or have any influence on communications, let alone telecommunications, was blithely overlooked by most supporters of “net neutrality." The fact that, since the early part of the 20th Century, the feds tilted the balance in favor of the ISPs by blocking competition to create or use cable lines parallel to old AT&T lines is often overlooked by detractors of Net Neutrality, and it's all connected to the source of the problem: government -- specifically, the FCC.

The FCC fungus sprouted during the Coolidge Administration in 1926 under the title “Federal Radio Commission” (FRC), and its first head was the collectivist Herbert Hoover. And from its genesis to the present day, politicians have offered two “justifications” for the existence of the FCC.

First, they have said that the radio spectrum is a “limited natural resource”, so, they've claimed, the government should be in control of it. But if one uses that kind of logic, one could argue that there are only a limited number of trees on the planet at any given time, and so politicians should regulate the content, production, and distribution of books and those archaic things called “newspapers”.

Would they argue for that? Fat chance.

The second argument the statists make to support the existence of the FRC/FCC is that radio waves travel over state borders, and so they can “regulate” (read, threaten with punishment if people don’t comply) communications under the Interstate Commerce Clause of the US Constitution.

But this clause, found in Article One, Section Eight, of the so-called rules they swear oaths to uphold, was intended to act as a remedial measure if States (as governmental entities, hence the capital S) were imposing tariffs on products coming from other states. It was supposed to be a way to stop state against state trade wars, not give federal politicians total power to “regulate” anything sold over state borders.

The answer is not to give politicians more strength to follow the power they have already used to slow progress and lower prices. Even now, the feds allow your local government to block cable providers from offering you service -- which damages competition, and increases prices, all of which will be blamed on the reversal of "Net Neutrality" rather than the government blocks. The answer is to completely and utterly unfetter all artificial barriers -- including local ones -- to entry in the field of telecommunications.

When cell phones started, they cost over $3,000 and were the purview of the "wealthy". Today, thanks to competition entering the field, one can get a free hand-held computer/phone/camera/radio when signing on for a $40 per month cell plan. These prices dropped thanks to business competitors trying to satisfy consumer demand, even in the stifled, overly-regulated (but less than previously) politicized system after the AT&T breakup.

Freeing up internet providers allows for innovation geared towards faster service, and these breakthroughs are eventually offered to people at lower price points.

So stand tall in revealing “Net Neutering” for what it is: state control, economic fascism, and unethical dealings with others. Be happy that the FCC at least changed policy direction, even if one cannot eliminate the bureaucracy altogether, and decry those who not only spout populist drivel about “Net Neutrality” but threaten those who promote freedom.

Indeed, FCC Chairman Ajit Pai has been threatened with death by numerous people via Twitter and other social media platforms. And the platforms have not dropped many of those making the threats. 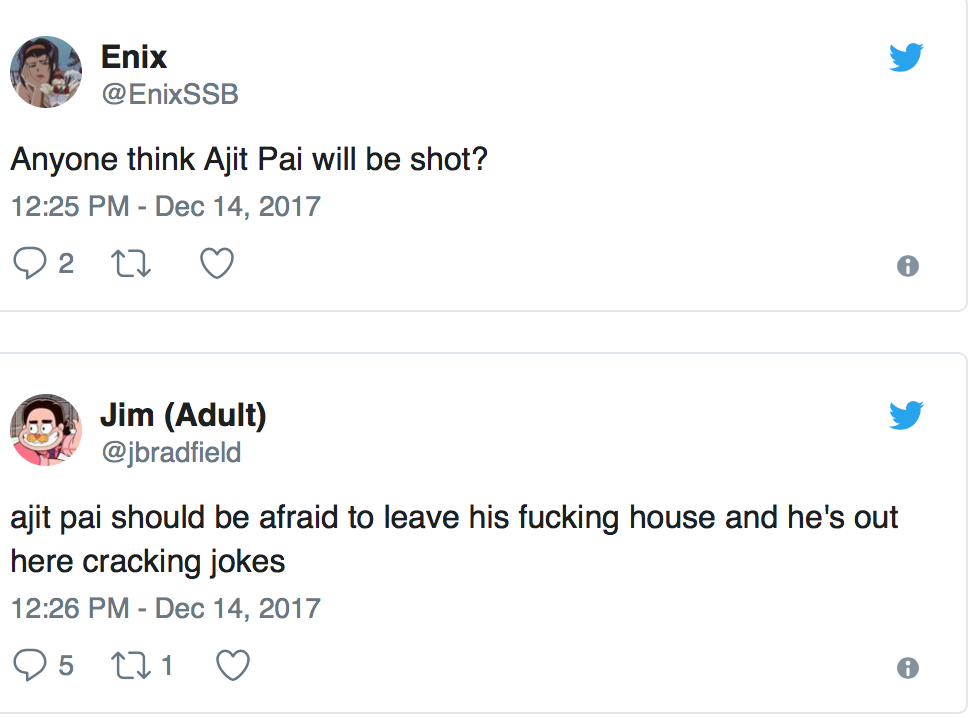 Imagine, a guy who simply wants to allow for more freedom, being threatened for his stance. This is what collectivists often do, even as they claim positions of virtue.

Net Neutrality is neither virtuous nor sanctioned by the US Constitution. These facts are clear, and no amount of threats from collectivists can change them.