In the never-ending cycle of politicians donning their “Holier-Than-Thou” armor, and claiming that the “opposition” (a key word, for later reference) is politicizing a tragedy, even as said same politicians engage in precisely that offensive behavior, we can, of course, now place certain Democrats’ rhetoric regarding Trump, the CDC, and the Wuhan Coronavirus, Covid19.

As Eric Boehm reports for Reason:

The trouble is, that’s not precisely true.

Unfortunately for the not-so-honest Democrats, Boehm clears up the record:

Trump has proposed budget cuts for the CDC in each of his budgets since taking office, but Congress never approved those proposals. Trump's most recent budget plan calls for a 16 percent cut to the CDC, but that budget has yet to be approved by Congress. It's fair to say Trump has tried to defund the CDC, but it's inaccurate to say that he has succeeded—or that those fictitious cuts have affected the agency's ability to respond to COVID-19.

And, as Boehm notes, those who validly want to criticize the Trump Administration’s handling of the Covid19 outbreak have plenty to offer. For example, when various localities requested test kits in mid-February, the CDC sent hundreds of them. Buuut… they were faulty, and allowed the potentially infected to circulate thinking they were healthy.

But the minutiae of failed, dyspeptic CDC operations are a bit harder to attach to Trump as manifestations of some sort of sociopathic lack of care, so, it seems, harridans on the left are much more inclined to fudge the truth than to look at reality.

So we see the case as described by Boehm, and we see more.

Not to be outdone, that Medieval paladin of the left, “The Guardian”, decided to turn into sheer false propaganda its Facebook thumbnail link to a story about Trump and the Covid 19 virus. The link, which I screen-capped from the page of a leftie friend, claims: 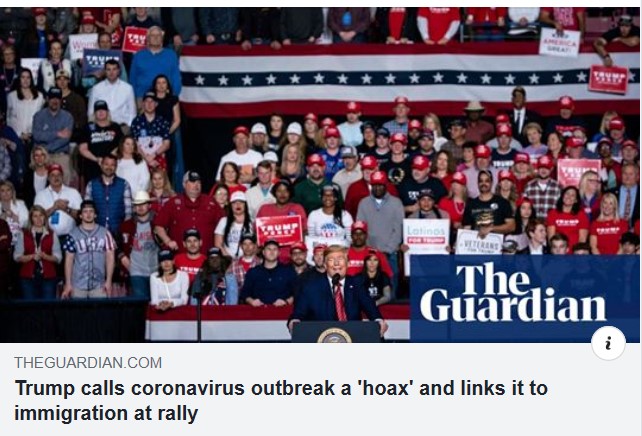 Of course, if one is self-loathing enough to click-through, one sees something completely different in the actual Guardian headline:

Which reveals a contrast that’s a bit… problematic, to put it mildly.

In fact, at a South Carolina rally, Trump did, indeed call the criticism of his handling of the virus a “new hoax”. He didn’t call the virus a hoax.

And, yes, he did link that to immigration, because many people fear that visitors to the US from other nations could be crossing the border without being tested or going through a quarantine of 28 days, which seems to be the length of time an infected person can remain asymptomatic while still being at risk of communicating the virus.

It’s almost painful to have to slog through all the political mud being thrown while trying to get solid information about a potentially deadly disease, but, of course, this is something politicians seem to do to us without any shame.