In recent weeks, Democrats have used an e-mail campaign to drum up support for their efforts to bail out the United States Postal Service (USPS) and stop the postmaster general’s planned cost-cutting measures and reforms.

So, why didn’t Democrats support the USPS by sending out its call to action by using only postal service mail and snubbing its competitor, e-mail?

Some of the reasons Democrats chose to use e-mail may include:

·         Faster Delivery: With snail mail, the Democrats can expect supporters to receive their message in 3-4 business days. With e-mail, the message is delivered immediately.

·         Faster, Easier Response: With snail mail, supporters have to set aside time to write a letter of support, research where to send it to their elected officials, and then employ a form of delivery. With e-mail, they simply click on a link and add their names to a petition.

·         More Reliable Delivery: E-mail removes the potential for mistakes and oversights in the sorting, handling and delivery of hard-copy letters by postal workers.

·         Less Expensive: With snail mail, Democrats need to affix sufficient postage and pay staff to stuff, stamp, and address letters. With e-mail, they employ an e-mail database and press a button.

Democrats’ e-mail campaign appears to have been at least somewhat effective, as Postmaster General Louis DeJoy has postponed his plans to downsize and revamp the USPS.

But, Democrats also want $25 billion to bail out the USPS, which lost $8.8 billion in Fiscal Year 2019 and lost $2.2 billion in the most recent quarter. Democrats are refusing to agree to a new coronavirus relief stimulus package unless they get the $25 billion and House Speaker Rep. Nancy Pelosi (D-Calif.) has even called the House back from recess in order to vote on a bill dedicated to protecting and providing the funding to the USPS.

A look at the Democratic Party email is available below. 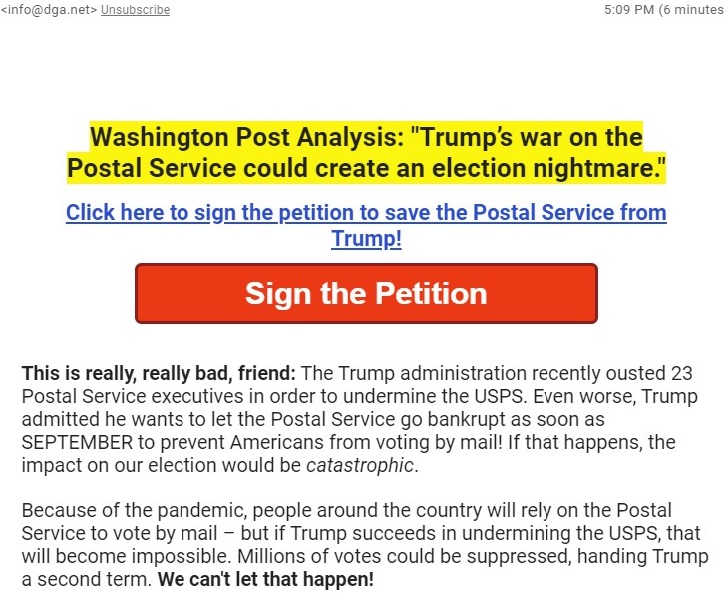 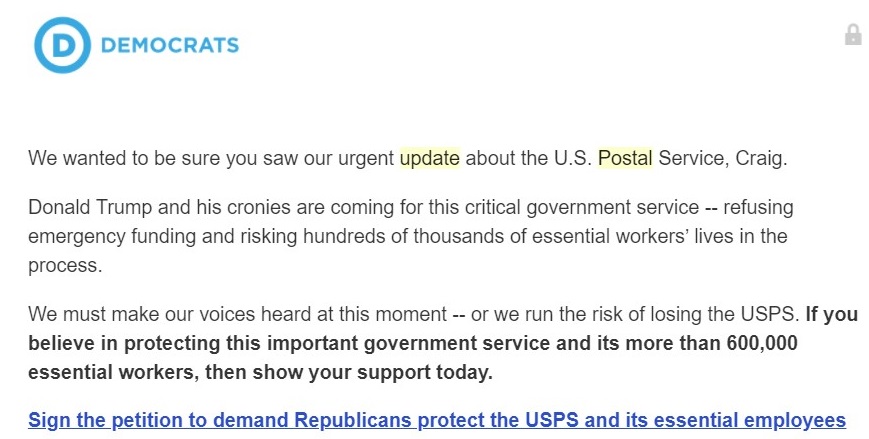