Never underestimate the capacity of collectivists of every stripe to insult people.

After all, they have no problem attacking individual rights, so what’s wrong with a little insult added to the injury?

And please forget that these are the kinds of people who continually virtue-signal about “hate speech” and being “accepting” and “loving”.

Well, it appears that the virtue-signaling, kindly Governor of New York has had enough of the plebes complaining that he, the Emperor of the Empire State, has locked them out of their careers.

On Wednesday last week, Andrew Cuomo told New Yorkers protesting to open the state that if they wanted to get back to work, they should “get a job as an essential worker.”

How sweet of him.

This in a state where his order shutting-down what he calls “non-essential businesses” has contributed to a towering increase in unemployment; that’s 1.4 million new claims since his order, an increase that has been so powerful, the New York State unemployment system was overwhelmed and collapsed.

Clearly, Mr. Cuomo is more inclined to follow the soviet style of command-and-control economics -- whereby the Communist Party leaders in the old USSR picked and chose which industries were “important” and how much of what they made was “essential” – over allowing consumers to decide for themselves, this latter allowing resources to flow where people themselves decided they should go.

Yet Mr. Cuomo, in addition to injuring these people through economic deprivation and clear attacks on the Bill of Rights, has the unalloyed arrogance to add insult to injury.

But he’s found fine company a few police-state miles south and west in the form of Pennsylvania’s Governor, the erudite and refined Democrat, Tom Wolf.

Not to be confused with novelist, classical art appreciator, and critic Tom Wolfe, this pseudo-man-of-letters decided to record himself telling the serfs clamoring for freedom from his job-killing shut down that “There’s no better time to retreat into a book, unwind, and relax.” 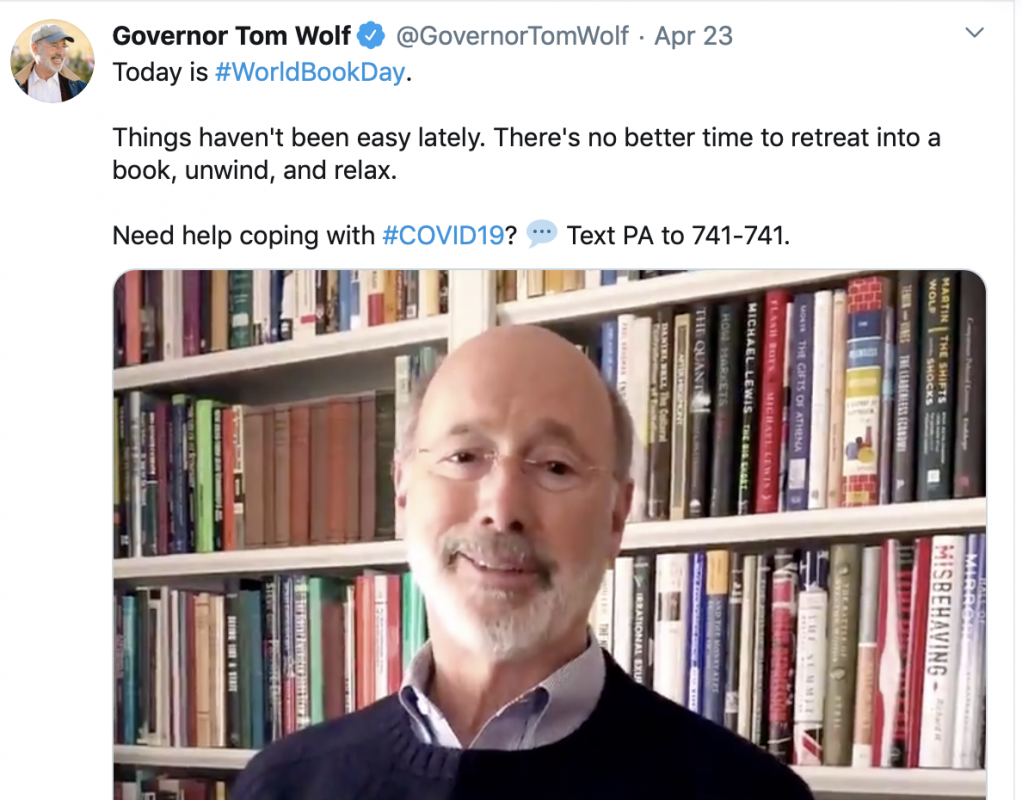 If they weren’t padlocked by Wolf’s unconstitutional diktats.

And, surely, many people would love to grab a book online, but since the jobless rate in PA places it fourth, per-capita, in the US for shut-down-related unemployment claims, it’s possible that non-government folks are watching their pennies a bit more closely than Mr. Wolf.

He, of course, receives his salary via taxation and tax-based-borrowing, whether PA residents want to pay or not.

And he, of course, is the man who has ordered his police force to cite people if they should dare try to open for business, an order similarly issued by Commissar Cuomo.

Perhaps both of these men could spend a bit of time reading.

Reading the US Constitution, and Henry Hazlitt’s “Economics in One Lesson”.

They’re not reading those now, and they certainly aren’t reading the signs of protest and lines of worry and frustration etched into the faces of their political prisoners.