Are people still actually talking about the young propaganda machine also known as Parkland activist David Hogg? I thought his “15-minutes” were up about half-an-hour ago, but I digress. The latest dumbass comment originating from the fingertips of Hogg recently made its debut, and people let him have it for his ill-informed musing.

When Hogg took to Twitter on Friday, he probably didn’t expect the blowback he received for two of his tweets that made him look like a hypocritical alarmist.

Here’s Hogg’s first tweet that pretty much drew laughs from the majority of people that read it:

Hogg was put in his place by a woman on Twitter who called him out for his affiliations: 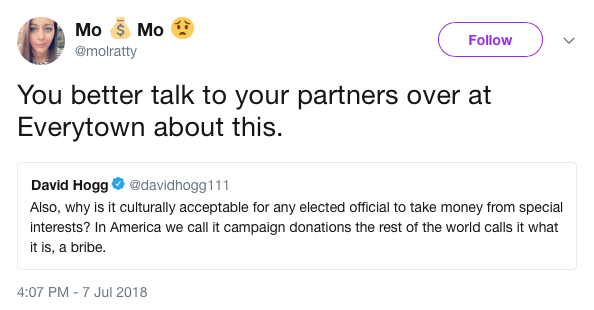 The woman’s response definitely points out the hypocrisy of Hogg calling out “elected” officials for the campaign donations they receive. Hogg is partnered with the Everytown for Gun Safety activist group. It’s pretty hypocritical to call out people running for office for taking donations. I’m pretty sure you can’t prevent someone from making a donation, so that’s the first point.

The second point is that Everytown for Gun Safety takes donations from anyone willing to part with their money in order to be able to fund protests that could possibly influence policy. I'm not necessarily bashing the organization. It's their right to exist. This is directed at Hogg, who would be out of his depth in a kiddie pool.

If that wasn’t enough, Hogg then tweeted this little nugget of wisdom in response to a critic of his previous tweet:

Quiz time: Can anyone name me one right a man has that a woman doesn’t? I’ll wait.

Secondly, a gun is an inanimate object. It’s not a person. We all know this, but apparently Hogg doesn’t. That’s not how rights work. Okay, unless you’re “Johnny Number Five” from the movie “Short Circuit.”

Also, isn't it kind of sexist for Hogg to trivialize women and their rights in order to make a political point about guns?

Now listen up, David. Rights are afforded to people, not machines. Although, with the progression of technology, that could change in the future.

The Twitterverse absolutely skewered Hogg for his latest foray into "dumbassery": 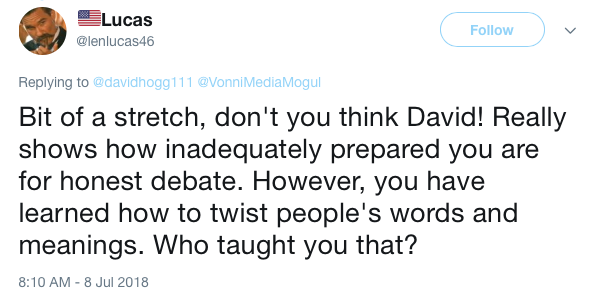 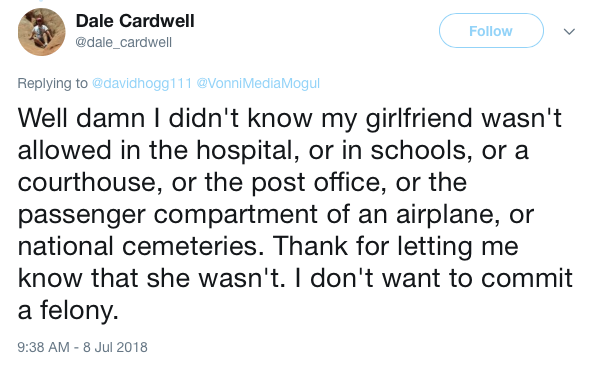 Oh, David Hogg. If for nothing else, thank you for constantly giving the rest of us the material to crap all over the far-Left agenda in this country.