The left is so completely out of their minds that they’re now apologizing for other people’s comments in the absence of an apology from the original person’s comments. If the person doesn’t want to apologize because they did nothing wrong, then who are you to speak for them in terms of kowtowing to the leftist mob or the Alphabet mafia?

“Harry Potter” actor Daniel Radcliffe took it upon himself to write an essay for LGBTQ crisis intervention organization The Trevor Project in which he apologized for “Harry Potter” creator and author J.K. Rowling after tweeting against “erasing the concept” of biological gender.

“To all the people who now feel that their experience of the books has been tarnished or diminished, I am deeply sorry for the pain these comments have caused you,” Radcliffe wrote. “I really hope that you don’t entirely lose what was valuable in these stories to you.”

Here are the Rowling’s “offending” tweets: 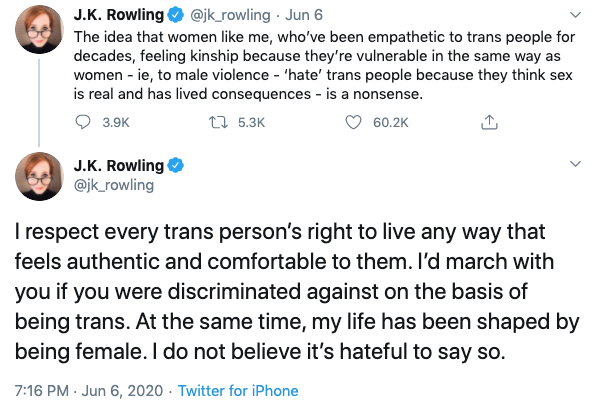 Why is it that Radcliffe needed to apologize? His heart might have been in the right place, but his brain was nowhere to be found.

It’s not like Rowling was cursing the trans community while espousing her opinion. In fact, she proclaimed her “love” and “respect” for the trans community more than once within a few sentences. To be fair, Rowling might’ve felt the need to do so because she knew the hate that would be thrown at her for having an opinion that doesn’t fit the “Twitterati’s” narrative.

“Transgender women are women,” Radcliffe also wrote. “Any statement to the contrary erases the identity and dignity of transgender people and goes against all advice given by professional health care associations who have far more expertise on this subject matter than either Jo or I.”

Well, people who work in the “professional health care” community also chastised people for protesting stay-at-home orders and wanting to go to church, but seem to have no problem applauding those who could care less about the social distancing that we’re all supposed to abide by in recent racially-driven protests.

Also, I’d hate to burst Radcliffe’s bubble that he’s lived in his entire adult life, but trans women - biologically - are not women. They may “identify” as such, but that doesn’t make it so.

The bottom line is that people are allowed their opinions, and while people are also entitled to criticize those opinions, the same critics shouldn’t apologize for others when it’s neither needed nor wanted.