Cruz: Republicans are 'Cutting a Deal with Harry Reid' 'On Executive Amnesty' 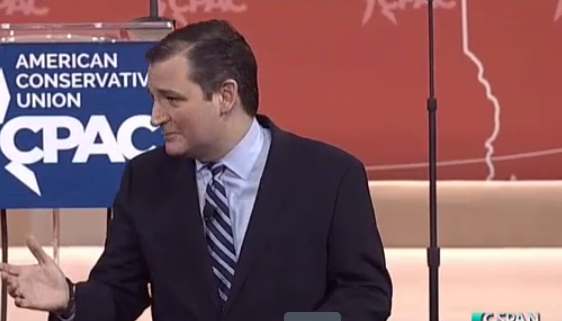 Sen. Ted Cruz (R-Texas) had harsh words for his fellow Senators today saying that “Republican leadership is cutting a deal with Harry Reid to give in on executive amnesty.” The reason Republicans are caving is “because they’re not listening to you,” Cruz told the crowd during a question-and-answer session with Sean Hannity at the Conservative Political Action Committee (CPAC.)

Cruz repeatedly hit on the theme that Washington insiders were responsible for choices that voters had overwhelmingly rejected like Obamacare and executive action on amnesty.

Cruz told the mostly young audience that he “wants to be a destructive app to American politics.”

Here’s the highlights from the Q and A:

“You did a 21-hour filibuster,” said Hannity. “21 hours: the purpose was to strip funding from the healthcare bill… Your fellow Republicans, Rick Santorum called you a ‘bomb thrower;’ Senator McCain said it was ‘an agonized odyssey’ and then used the term ‘wacko-bird;’ Senator Graham said it was ‘hostage taking’ and ‘political overreach.’ My question is what do you say back to those Senators that criticized you for standing up for your promise?”

Cruz: “The simple answer is that we shouldn’t be listening to Washington. We should be listening to the American people. Obamacare is a disaster. Millions of Americans have lost their jobs, have lost their healthcare, have lost their doctor. …I seem to remember when so many of the people in this room said ‘Stand up and stop the train wreck that is Obamacare’ the Washington pundits all said ‘Oh this will be a disaster; this will keep Harry Reid as Majority Leader forever!’ Now did I miss that in the last election?” Cruz asked to cheers and applause.

Cruz continued: “The key to change, as a result of that fight, millions of men and women across this country rose up and said ‘Stop the disaster that is Obamacare!’ …Republicans across this country campaigned saying ‘if you give us the majority we’ll stop Obamacare,’ and what happened? We won the biggest tidal wave since the 1920s and we retire Harry Reid as Majority Leader!”

Hannity said, “We have a similar fight going on” with Obama’s executive order on immigration. Hannity asked Cruz why he thinks the bifurcated deal is “the wrong strategy.”

Cruz: “Look, unfortunately Republican leadership is cutting a deal with Harry Reid to give in on executive amnesty.” The reason why, said Cruz directly to the audience, is “because they’re not listening to you.”

“I talked about the divide between Washington and the people,” said Cruz. “In Washington K Street and Wall Street love amnesty. They support the substantive policy. There is a mendacity about Washington: they want to take a show vote, but they don’t actually want to follow through on what they say.”

“How do we change it?” Cruz asked the mostly young audience. “Think about it in the tech context. In the tech context we know about disruptive apps. They come in and change how a good or service is distributed. And inevitably the incumbent providers fight back viciously. So when Uber or Lyft comes into a city, the taxi commissions do everything they can to kill it.”

“What I’m trying to do more than anything else is to bring a destructive app to American politics,” Cruz said to cheers.

“We’ve witnessed the horror of what’s happening with ISIS,” said Hannity, reeling off a list of atrocities ISIS has recently committed. “Radical Islamists, they’re on the move; they’ve taken a lot of ground that our troops sacrificed and died for in Iraq. My question to you is… what is your take on what America needs to do, and why can’t the President admit that the Islamic State is in fact, Islamist, and that radical Islamic exists?”

“We need a Commander in Chief who will actually stand up and defend the United States of America,” said Cruz, drawing cheers.

Cruz went on: “You know the State Department spokesperson just said recently that ‘We can’t win this by killing ISIS. We need to give them jobs.’ What utter and complete nonsense. Listen, that is precisely how we win this!”

“We kill the terrorist leaders before they kill us,” said Cruz to thunderous cheers and applause.

During the “lightning round,” Cruz said that he believed the issue of gay marriage should be left to the states (but judges should not overrule states’ laws.) And on the issue of Colorado’s pot legalization, he said: “If the citizens of Colorado decide they want to go down that road, that’s the prerogative; I don’t agree with it, but that’s their right” he said, calling it an example of the “laboratories of democracy” in action.

When asked what his top five agenda items would be if he was elected president, Cruz responded: “Number one, repeal every blasted word of Obamacare. Number two, abolish the IRS. Take all 125,000 IRS agents and put ‘em on our Southern border. Number three, stop the out of control regulators at the EPA and the alphabet soup of Washington. Number four, defend our Constitutional rights – all of them! And number five, restore America’s leadership in the world as a shining city on a hill.”

Each of the agenda items received cheers and applause.