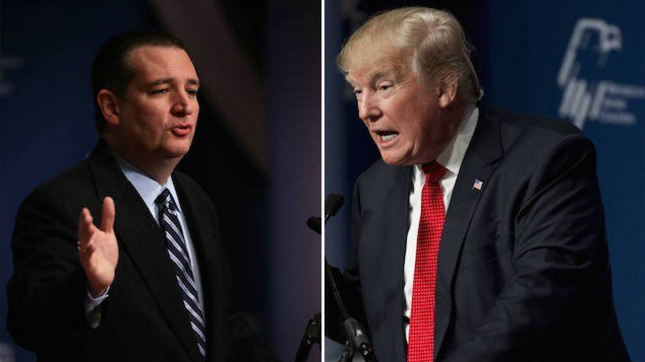 GOP front-runner Donald Trump announced on Tuesday that he will not be participating in Thursday night’s Fox News Republican presidential debate in Des Moines, Iowa for fear of being treated “unfairly” by Fox News host Megyn Kelly as a debate moderator.

In an interview with conservative talk show host Mark Levin, rival Sen. Ted Cruz (R-Tex.) criticized Trump’s decision to boycott the debate as a reflection of his “lack of respect” for the American people, especially the voters in Iowa.

“I think every candidate for President owes it to the voters to go and humble yourself and put yourself before them and answer their hard questions,” said Cruz. “Nobody’s going to get elected President from a TV studio in Manhattan or New York. And the fact that Donald is now afraid to appear on the main stage -- that he doesn’t want his record questioned -- I think that reflects a lack of respect for the men and women of Iowa.”

He went on to challenge the real estate mogul to a one-on-one debate:

“If Donald is afraid of Megyn Kelly, I would like to invite him on your show to participate in a one-on-one debate,” said Cruz.

He said that the two of them can do the debate "any number of ways," suggesting Mark Levin, Rush Limbaugh, and Sean Hannity as possible moderators.

Cruz noted that, if Trump is too “afraid” of the moderators suggested, he and The Donald can hold a debate “mano-a-mano,” so long as it takes place before the Iowa caucuses on Feb. 1.

“That’s what a candidate who actually wants to work for the people -- wants to earn the support of the people -- will do is stand up and defend your record,” Cruz added.

Trump has yet to respond to Cruz’s challenge. His attacks on Megyn Kelly, however, are back in full swing.

I refuse to call Megyn Kelly a bimbo, because that would not be politically correct. Instead I will only call her a lightweight reporter!