A crazy topless feminist was arrested over the weekend after trying to steal Baby Jesus from the Vatican’s Nativity scene while screaming something about God being a woman.

A topless female activist caused a scene in Rome today when she jumped a guardrail and tried to storm a nativity scene in St. Peter’s Square. Italian police took down the demonstrator as she tried to steal a statue of baby Jesus, and she repeatedly shouted “God is woman” throughout the arrest. The message was also painted on the woman’s bare back.

Thankfully, the would-be Jesus-snatcher was taken down before she could grab the statue – unlike this other feminist activist, who managed back in 2014 to successfully nab Jesus before police were able to detain her: 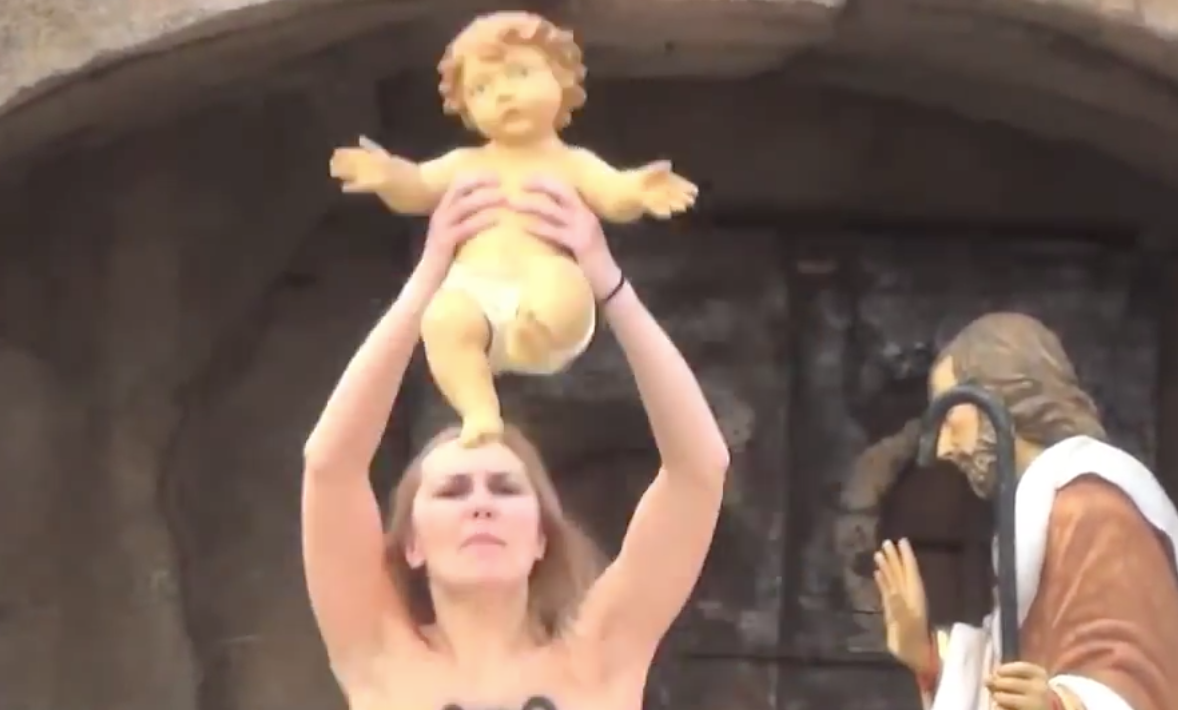 This year’s bizarre rendition of capture-the-Jesus featured Alisa Vinogradova, a member of the Ukrainian feminist organization FEMEN, which – since I’ve never heard of them, either – is apparently known for protesting the “patriarchy” and demanding the Vatican “leave women alone.” According to FEMEN’s website:

FEMEN female activists are the women with special training, physically and psychologically ready to implement the humanitarian tasks of any degree of complexity and level of provocation. FEMEN activists are ready to withstand repressions against them and are propelled by the ideological cause alone. FEMEN is the special force of feminism, its spearhead militant unit, modern incarnation of fearless and free Amazons.

Got that, ladies? If you’re such a shrieking, hairy-pitted banshee that you can’t even find a halfway decent date on Tinder and are at a fairly heightened risk of dying alone and being eaten by your cats, FEMEN’s the place for you. Which makes sense, considering only a person with such a stellar personality could have successfully chased away everyone decent in her life and wound up with nothing better to do on Christmas Day than steal Baby Jesus from his manger.

Then again, feminists have never had much regard for helpless infants, real or ceramic, so I guess this fits.

Check out the attempted kidnapping;