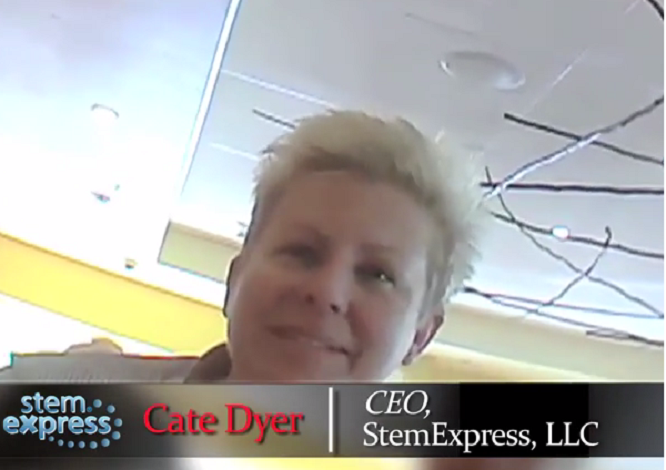 This latest video is only two minutes long and is more of a trailer of things to come. Most of its content was made up of bits and pieces of previous videos. The one new section featured Cate Dyer, the CEO of StemExpress in a lunch meeting with undercover operatives posing as representatives of a biotech firm. Dyer is seen laughing about how StemExpress purchases fully intact aborted babies from Planned Parenthood. As she paid the check, Dyer appears to be laughing about how lab recipients of the aborted babies go into shock when they open a box to find an "intact case" (whole body):

“Oh, yeah, if you have intact cases, which we’ve done a lot, we sometimes ship those back to our lab in its entirety."

CMP explains the terminology used by those in its videos to describe an entire aborted body:

StemExpress CEO Cate Dyer admits that StemExpress gets intact fetuses from the abortion clinics they work with shipped to their laboratory. “Case” is the clinical term for an individual abortion (cross reference with Planned Parenthood Senior Director of Medical Services Dr.  Deborah Nucatola’s discussion of “this case, that case” in lunch video), so an “intact case” means an “intact abortion.”

Once the CMP videos began to be released, StemExpress realized a lunch they had back in May was probably an undercover sting, so they sued to preemptively block those videos from being seen.  Judge O'Donnell issued a restraining order barring CMP from releasing any videos showing current or former Stem Express employees, at the end of July - then rescinded the order today.

The Center for Medical Progress isn't off the hook yet because the judge said that, even though they couldn't' be prevented from releasing the video, it was likely that StemExpress would prevail in its lawsuit claiming its privacy was violated.

Earlier this week StemExpess announced it was cutting all ties with Planned Parenthood, but denied that it had done anything wrong.

The newly-released video is below, but expect more to come next week.