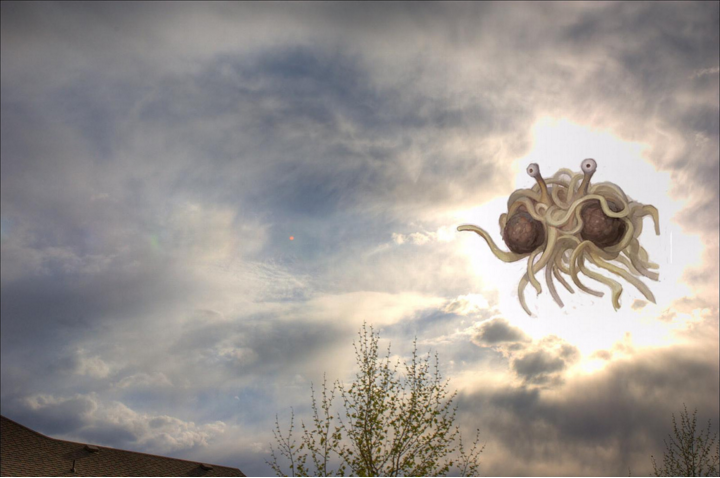 A federal judge ruled Thursday that “Pastafarianism” isn’t a real religion worthy of accommodations after a practicing inmate put in a bid for the "ability to order and wear religious clothing and pendants, the right to meet for weekly worship services and classes and the right to receive communion.”

The inmate, Stephen Cavanaugh, is serving four to eight years for assault and weapons charges at the Nebraska State Penitentiary. Cavanaugh sought $5 million for “emotional, psychological, and spiritual pain” he claims to have suffered because corrections officials refused to let him dress up like a pirate with a colander on his head.

U.S. District Judge John Gerrard ruled that “FSMism” is a parody religion undeserving of the same protections given to more “mainstream” faiths.

“This is not a question of theology: it is a matter of basic reading comprehension. The FSM Gospel is plainly a work of satire, meant to entertain while making a pointed political statement. To read it as religious doctrine would be little different from grounding a "religious exercise" on any other work of fiction.”

“Of course, there are those who contend—and Cavanaugh is probably among them—that the Bible or the Koran are just as fictional as those books. It is not always an easy line to draw. But there must be a line beyond which a practice is not ‘religious’ simply because a plaintiff labels it as such.”

“The Court concludes that ‘FSMism’ is on the far side of that line.”

This isn’t even the first time so-called “pastafarians” have attempted to use religious liberty protections to make a statement, or just simple fools of themselves.

Last year one Michael Schumacher claimed the ability to wear a colander in his Wisc. driver’s license photo, though the state didn’t put up much of a fight. They just told him to make sure his face was visible.

It’s a trend that also spans across international waters as it seems more and more people are vying for the funniest picture to show off to all their friends. But it didn't go quite as planned for one Russian man, who is now required by law to wear a colander at all times while driving his vehicle at the risk of losing his license.