The Chair of the Fairfax County Democratic Committee is calling for a local school board member to resign because she supports Republican presidential candidate Donald Trump for president, claiming her support for Trump is setting a “poor example” for children.

“I am appalled by Donald Trump’s remarks about women, but unfortunately, I am not surprised. What is downright insulting to Fairfax County families is that Elizabeth Schultz, who purports to stand for family values and is tasked with oversight of our great school system, is not only defending Donald Trump’s disgusting comments, but joking about them,” Langley wrote.

As an economist, naturalized citizen, taxpayer and registered voter, there is plenty about Donald Trump that I find distasteful. As a mother who raised a family here in Fairfax County, I am absolutely disgusted with the poor example Elizabeth Schultz is setting for our children.

To support her argument for why Schultz should resign, Langley pointed to Schultz’s tweets, which Langley calls “wild and unhinged.” Langley referenced a tweet by Schultz, in which she wrote, “Why the #TrumpTapes don’t matter.”

In her tweet, Schultz wrote about how in Norway, children can allegedly now change their genders online. Schultz also included the hashtag “#SCOTUS,” which appears to suggest she believes this issue can be a battle in the U.S. Supreme Court: 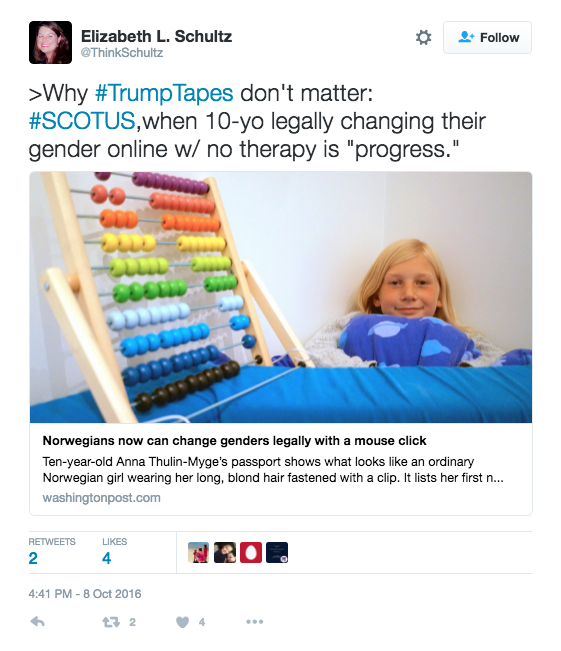 Another tweet that Langley called “intolerable and completely inappropriate” was a reference to guns in a broader conversation about Trump. In the conversation, Schultz brought up scandals supporting Democratic presidential nominee Hillary Clinton. In response, an individual told Schultz, “I hope at this point you’ve removed every mirror from your house,” to which Schultz responded, “Nope, just buying more ammo”: 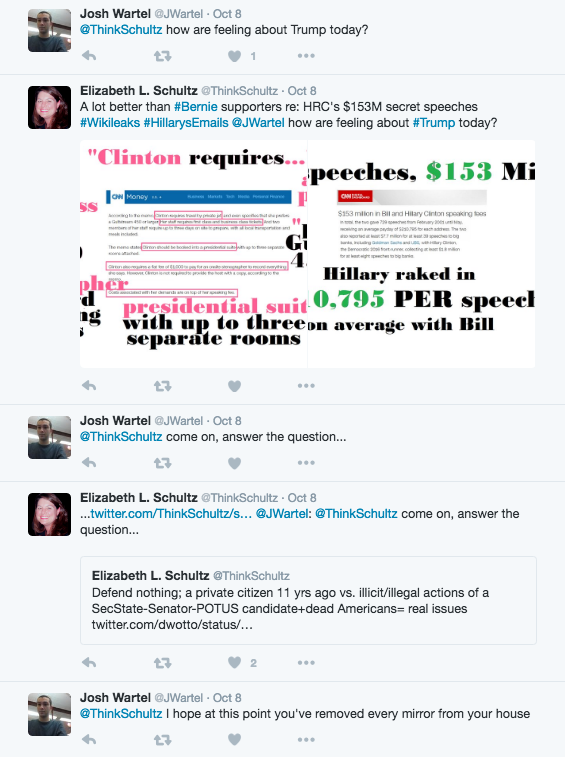 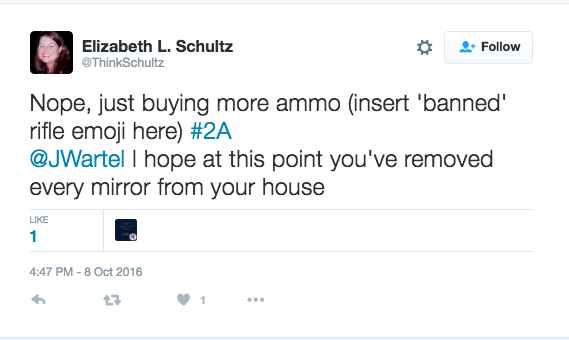 Throughout her letter, Langley repeatedly states Schultz is “defending” Trump’s remarks about women. Schultz tweeted “defend nothing” in regards to the released Trump tapes. Schultz wrote “a private conversation 11 years ago” is not a real issue compared to a presidential candidate who has conducted “illicit/illegal actions” that resulted in “dead Americans” during her tenure as the secretary of state: 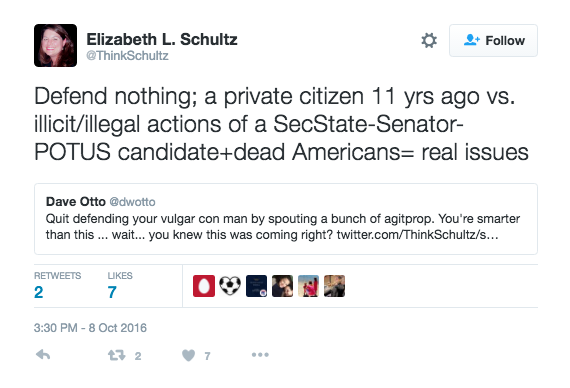 Other instances of Schultz using the #TrumpTapes hashtag include her pointing out atrocities committed by terrorists, referencing cheating scandals by previous presidents, and instructing people to “worship God, not politicians.”