Commercial Airliner Explosion over Somalia Kills One, Two Others Injured 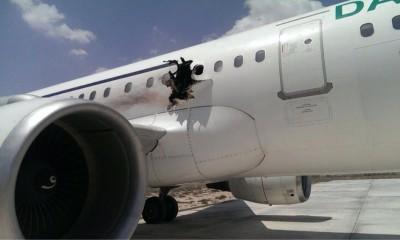 A Daallo Airlines commercial flight out of Mogadishu had to make an emergency landing after an explosion blew a hole in the cabin, which left one person dead and two others injured.

Late Tuesday night, a source with knowledge of the investigation told CNN that Somali authorities confirmed one passenger had been killed after being blown or ejected out of the hole created by the explosion.

The plane was said to be between 12,000-14,000 feet before the explosion. The pilot was able to land the aircraft safely.

It is not clear what caused the blast, but an explosive device has not been ruled out. According to CNN, initial tests of the damage on Flight D3159 came back positive for explosive residue.

Despite the supposed evidence of explosive residue, no group has taken responsibility for the plane’s explosion.

Here is the view from inside the plane after landing...