CNN’s Jim Acosta is the epitome of why people laugh at the media these days.

Acosta’s constant state of being triggered at literally anything anyone not on the Far Left says or does has become almost comical in nature. But really, it’s just sad that a supposed journalist can’t recognize a joke in favor of being offended.

As we all know from the sound of California liberals spontaneously combusting all over the place, President Trump’s first visit as Commander-In-Chief to the state included a stop at the Marine Corps Air Station in Miramar.

Of course, Acosta was there, and in typical Acosta fashion, the “journalist” found something to be offended by.

Acosta tweeted out a picture of a man attending the speech — no word on if the guy is a Marine — who wore a Pepe the Frog t-shirt to the event. For liberals, think of Pepe as a universal trigger for butt-hurt feelings. 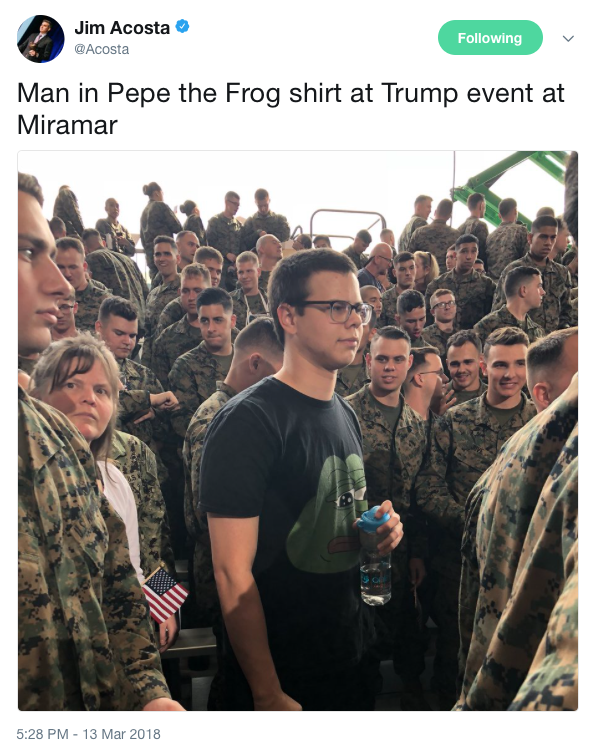 Wow! That dude must be a threat because of his shirt with a cartoon character on it!

The Pepe the Frog character is a popular symbol used in memes on online message boards and forums.

Apparently, the Anti-Defamation League (ADL) has claimed that the popular Pepe the Frog character is a “General Hate Symbol” about a year-and-a-half ago. While the ADL admits that the majority of “uses of Pepe the have been, and continue to be, non-bigoted,” the fact that some in the “alt right” use the Pepe symbol to include “racist or anti-Semitic connotations” was just too much for their delicate sensibilities to handle. Pepe joined the swastika as a symbol of hate on the ADL’s Online Hate Symbols Database.

So, because some hateful people used a cartoon character for nefarious purposes, the subject of so many memes should be deemed hateful for everyone.

Maybe Acosta felt like essentially doxxing someone after Trump bashed the media during his speech - which drew loud applause from the crowd.

Acosta must have felt the egg on his face, because the Marines - for the most part - had no problem with a disparagement of the media.

First, Acosta basically doxxing someone because of a t-shirt with a cartoon character on it is a ridiculous act carried out by a ridiculous little man who is constantly toyed with by a president that must feel like it's a game to mess with Acosta at this point.

Second, couldn’t anyone make any item or symbol racist with the proper motivation? That doesn’t make the item racist or anti-Semitic, unless the item or symbol is exclusively used by a hate group of some sort.

Someone needs to pull up a step ladder and tell Acosta to get off his high horse, because he has officially gone insane.