The left is where most true racists reside. Always have, always will. In today’s society leftists hide behind their media propagandists who run cover for them, their false narrative of being “tolerant,” and their constant accusations against others of what they themselves are typically guilty of, whether it be racism, sexism or even colluding with foreign powers.

While calling a black man “Uncle Tom” is an insult the left uses against other black people who don’t think exactly like them, it’s probably not even the most demeaning part of what Nelson tweeted.

I can’t even — just look (In case Nelson ends up deleting the tweet, here's a screenshot): 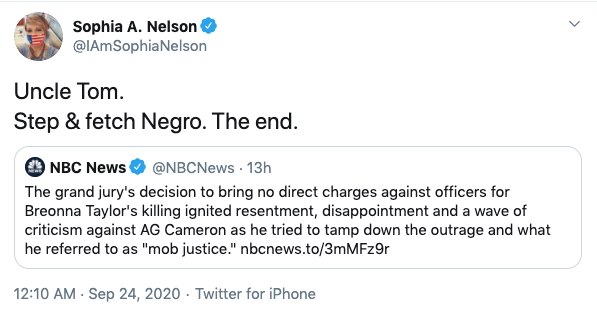 Think about it this way. If you didn’t know who said those things about Cameron, you’d most likely think what they said was racist. So who cares if Nelson herself is black?

I'm not calling for Nelson to be "cancelled" or to have anything done to her that affects her job. All I'm saying is that at the end of the day some people are just racists — even against their own race.