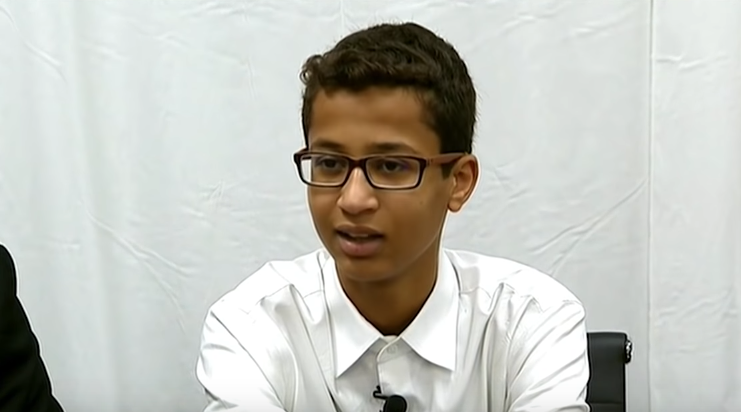 Time has officially run out on “Clock Boy’s” 15 minutes of fame as District Court Judge Maricela Moore dismissed the boy’s ridiculous lawsuit in Dallas on Monday.

Mohamed Mohamed (that’s a little redundant) had filed a defamation lawsuit on behalf of his 15-year-old son, Ahmed Mohamed, after the family used the religion of Islam to ignite a firestorm over the arrest of his son at his school.

Ahmed was the young boy who was arrested in 2015 for bringing a clock that clearly and intentionally looked like a bomb to school for a clock-making project. There was an outpouring of support for the child from liberals over what they deemed Islamophobia. Even President Obama invited the kid to the White House to tell him what a wonderful clock the boy made.

According to the American Freedom Law Center (AFLC):

The motion to dismiss was filed by lawyers from the American Freedom Law Center (“AFLC”) and local counsel Pete Rowe on behalf of the Center for Security Policy (“CSP”) and Jim Hanson, two of the defendants in the defamation case, which also named as defendants the local Fox affiliate, Glenn Beck, and Beck’s production company.

Mohamed had sued Hanson and CSP for statements Hanson had made on Beck’s program about the connection between the Clock Boy hoax bomb affair, the attendant media frenzy created in large part by his father Mohamed, civilization jihad, and the Counsel on American-Islamic Relations (“CAIR”), the Muslim Brotherhood-Hamas front group in the United States that promotes civilization jihad.

The senior counsel for the AFLC was not shy about the family of the boy’s motives into the lawsuit.

AFLC attorney David Yerushalmi spoke after the case concluded, repeated the sentiments of the defendants in the case and further expounded on what the purpose behind Mohamed’s lawsuit.

“This lawsuit filed by Clock Boy’s father is yet another example of Islamist lawfare, which is a component of the Muslim Brotherhood’s civilization jihad,” Yerushalmi said.

The purpose of the lawsuit, according to Yerushalmi, was to intimidate people into not making connections between Islam and terrorism or jihad. Yerushalmi explained that this kind of tactic is formally known as Strategic Lawsuits Against Public Participation, or SLAPP.

That specific type of lawsuit should not exist in countries that truly seek justice. The title SLAPP alone could be construed as a fear strategy whose only motivation is to shut people up. That’s not justice. That’s a communistic tool.

Yerushalmi continued, “The Islamists employ the progressive mainstream media to label any public criticism of a sharia-centric, jihad-driven Islam as ‘Islamophobic,’ and they add fear and financial ruin to the equation by utilizing the legal system to file SLAPP actions.”

Truly civilization jihad at its finest.

The AFLC stated that it will “petition the court for its legal fees and will seek sanctions against both the plaintiff and his attorney.”

Editor's Add-On: Back when the "clock boy' story broke, MRCTV went to a college campus and showed students a picture of the clock and asked them to guess what the device was without telling them that it was, in fact, a digital clock. Watch their reaction here.