Clinton: Women’s Rights are The First Targets of Fundamentalists 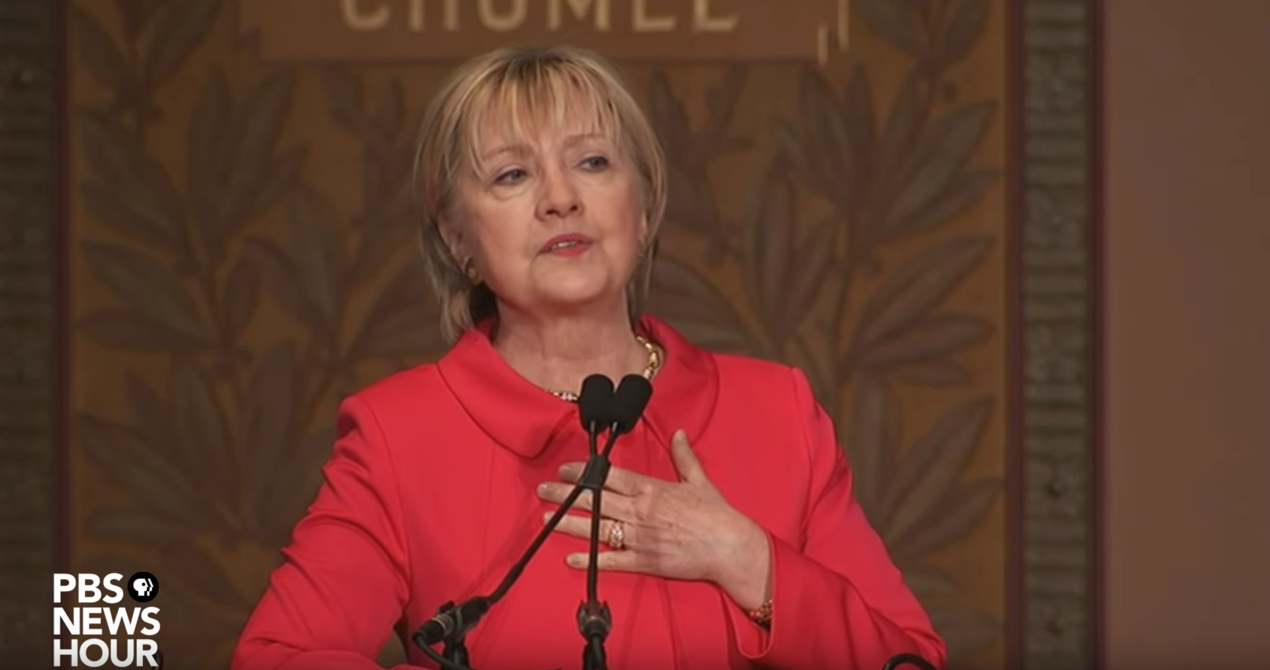 While speaking at Georgetown University on Friday, former Democratic presidential candidate Hillary Clinton said the “rights and full participation” of women in politics is the “great, unfinished business of the 21st century.” Clinton also stated “women’s rights and physical safety are often the very first targets of fundamentalists.”

Clinton, who was met with chants of “Hillary,” spoke to the largely female audience at the Georgetown Institute for Women, Peace and Security.

Now, some of you may have been here back in 2011 when we announced the creation of this institute. It came about for an ultimately profoundly simple reason. About a decade earlier, there had been a landmark resolution passed in the UN Security Council affirming women's crucial roles in peace and security. But the promise of that resolution has, with very few exceptions, remained largely unfulfilled. This is something that I talk often about with my close friend and predecessor, Secretary Madeleine Albright, who bleeds blue and gray.

After discussing the history of the institute, Clinton discussed how she believes the rights of women are the “great, unfinished business of the 21st century”:

I believed then--and, I have to tell you, I believe even more fiercely today--that advancing the rights and full participation of women and girls is the great, unfinished business of the 21st century.

Clinton claimed women are “critical” to the peace process and that it is backed up by “research, evidence, and facts,” making a quip about her campaign against President Trump:

Defense Secretary Mattis said it well when he said, “If you cut funds to the State Department, that means he has to buy more ammunition.” So the work that is done here at this institute, here at Georgetown, making the evidence-based case for the role of women and peace in security is incredibly important. It's always mattered, but today, it's even more critical. As this institute has grown, so too has the body of evidence showing that when women participate in peacemaking and peacekeeping, we are all safer and more secure. Studies show--here I go again, talking about research, evidence and facts...

Clinton went on to say “women’s rights and physical safety are often the very first targets of fundamentalists,” therefore making women important in the peace process:

But, in fact, when women are included in peace negotiations, agreements are less likely to fail and more likely to last. And we know that women's rights and physical safety are often the very first targets of fundamentalists. We also know that women are often the first to spot conflict on the horizon, coming their way. And when their insight and information is ignored, it often leads to consequences that might have been averted. At a time when sexual violence continues to be used as a strategy by terrorist groups, when women are being recruited by ISIS and Boko Haram, evidence suggests leaders who want to do more to guard against terrorism and violence should work even harder to help support and enable the participation of women.

Clinton made sure to inform her audience, “Now, before anybody jumps to any conclusions, I will state, clearly, women are not inherently more peaceful than men. That is a stereotype. That belongs in the alternative reality.”