Clinton: ‘We Don’t Know Exactly What the Pay Gaps Are’ 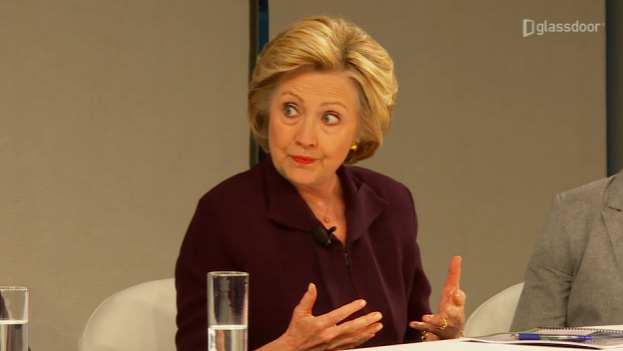 While speaking at a roundtable discussion on gender pay equality, Democratic presidential candidate Hillary Clinton broke from the popular feminist narrative on equal pay and said, “We don’t know exactly what the pay gaps are in many settings.”

During the Equal Pay Day discussion hosted by Glassdoor, Clinton was asked, “What is the role of government in fixing this? Because we’re talking both private sector and public sector. I know that you’ve been a strong advocate. What can policy do? What can’t it do?”

Clinton responded, “Well, there is already laws at the federal level and in many states that make the failure to provide equal pay illegal. But the problem is, there’s not enough transparency—to go to Robert’s point—and we don’t know exactly what the pay gaps are in many settings, predominantly in the private sector, because in the public sector, there is more transparency if you’re being paid by tax-payer dollars.”

Clinton then pushed for the Paycheck Fairness Act.

Clinton’s response conflicts with the position held by feminists, who have been arguing women—in general, across industries—earn between 55 cents to 79 cents to every white man’s dollar.