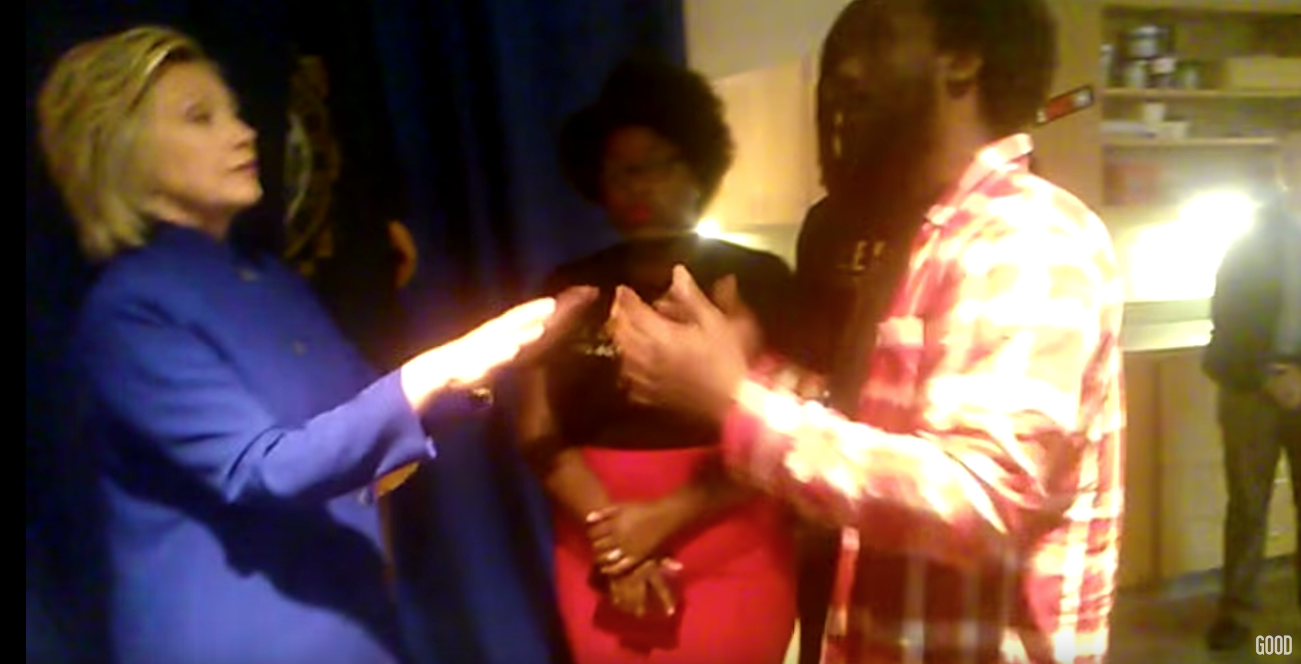 After Black Lives Matter protesters upstaged fellow Democratic presidential candidates Martin O’Malley and Sen. Bernie Sanders (I-Vt), Hillary Clinton held a private meeting with Black Lives Matter supporters. During the conversation with the activists, Clinton said America has not recovered from its “original sin” and referred to fellow white people as “us sinners.”

Five activists attempted to disrupt Clinton’s Keene, New Hampshire event but were stopped by security. Later, they spoke to Clinton in a private meeting.

Daunasia Yancey, the self-proclaimed founder of Boston’s contingent of Black Lives Matter, stated, “We did have a couple of particular questions that we wanted to ask her, and we were able to do so, and she was able to respond.”

The activists asked Clinton about her position on the War on Drugs and “the implications that has had on communities of color and especially black people in terms of white supremacist violence.”

Newly released videos reveal a tense conversation between Clinton and the activists.

During the conversation, one of the Black Lives Matter activists tells Clinton, “America’s first drug is free black labor and turning black bodies into profit.” Clinton responded with an affirmative, “Mhmmm.”

Speaking of the War on Drugs, an activist told Clinton, “You have been, in no uncertain way, partially responsible for this—more than most. Now, there may have been unintended consequences, but now that you understand the consequences, what in your heart has changed that is going to change the direction of this country?”

“What in you—not in your platform, not what you’re supposed to say—how do you actually feel that is different than you did before? Like, what were the mistakes, and how can those mistakes that you made be lessons for all of America or a moment of reflection on how we treat black people in this country,” the activist asked.

Clinton added she feels “committed to” and “responsible for” doing what she can, mentioning she has spent her career devoted to children.

She then mentioned, “There has to be a reckoning, I agree with that. But I also think there has to be some positive vision and plan that you can move people towards. Once you say, ‘You know, this country has still not recovered from its original sin’—which is true—once you say that, then the next question by people who are on the sidelines—which is the vast majority of Americans—the next question is, ‘So what do you want me to do about it?’ ‘What am I supposed to do about it?’”

“That’s what I’m trying to put together in a way that I can explain it and I can sell it. Because in politicians, if you can’t explain it, and you can’t sell it, it stays on the shelf,” she continued. “And this is now a time—a moment in time—just like the civil rights movement, or the women’s movement, or the gay rights movement, or a lot of other movements reached a point in time the people behind that consciousness raising and advocacy, they had a plan ready to go so that when you turned to, you know, the women’s movement, ‘We want to pass this and we want to pass that and we want to do this.’”

After more explanation, Clinton stated, “All I’m saying is your analysis is totally fair. It’s historically fair, it’s psychologically fair, it’s economically fair. But you’re going to have to come together a movement and say, ‘Here’s what we want done about it.’ Because you can get lip service from as many white people as you can pack in Yankee Stadium and a million more like it, who are going to say, ‘Oh, we get it. We get it. We’re going to be nicer.’ That’s not enough, at least in my book. That’s not how I see politics.”

Clinton also offered praise to the Black Lives Movement in general, “The youth of your movement is so critical but now all I’m suggesting is even for us sinners, find some common ground on agendas that can make a difference right here and now in people’s lives. And that’s what I would love to, you know, have your thoughts about.”

The Black Lives activists did not approve of Clinton offering advice and asking for policy recommendations. One of the activists responded, “I say this as respectfully as I can, but if you don’t tell black people what we need to do, then we won’t tell you all what you need to do.”

“What I mean to say is, this is and has always been, a white problem of violence. It’s not—there’s not much that we can do to stop the violence against us,” the activist explained.

After a tense back-and-forth of shouting, Clinton said, “Respectfully, if that is your position, then I will talk only to white people about how we’re going to deal with the very real problem.”

“But like what I’m saying is you—what you just said—was a form of victim-blaming. When you were saying what the Black Lives Matter movement needs to do to change white hearts is to—“

Clinton then scolded the Black Lives Matter activists for only wanting to change hearts. “If that’s all that happens, we’ll be back here in ten years having the same conversation.”

Unlike Sanders, who created an entirely new policy platform page after meeting with Black Lives Matter activists, the Clinton campaign has yet to issue a statement on the meeting.