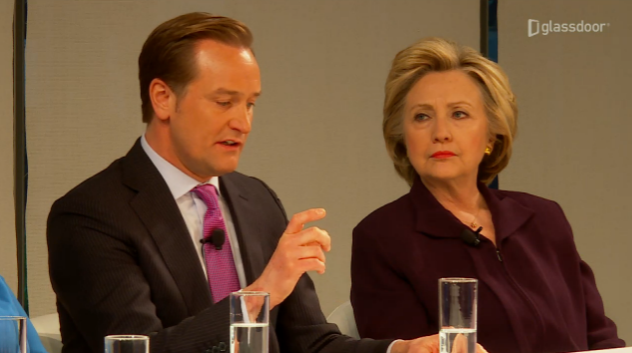 After discussing the need for “more transparency” and a “carrot-and-stick” method in order to coerce businesses to disclose their salary information, Clinton said there is a need to address implicit biases.

“We still have to be willing to address these implicit biases. The research is absolutely conclusive that people—men and women—carry different ideas in our brains, our consciousness, about how to evaluate men’s and women’s work,” Clinton stated.

“So it’s the same as racial and ethnic disparities," she continued. "You can give somebody a resume with exactly the same information—one’s a woman, one’s a man, one’s clearly, perhaps, Latino or African American by identifying characteristics, one isn’t—and there is just an overwhelming body of evidence that people who hire gravitate towards those who are white men.”

“If there is anything like a close contest, any amount of willingness to say, ‘Okay, maybe I’ll take a chance,’ is pretty hard to find,” Clinton asserted. “People feel they want to make a safe decision and that’s how they judge it.”

Clinton then called on people to acknowledge their implicit biases and challenged them to ask themselves, "Why are we making these decisions?"