Hillary Clinton’s presidential campaign issued a explainer condemning a cartoon frog meme for allegedly being a symbol of white supremacy. 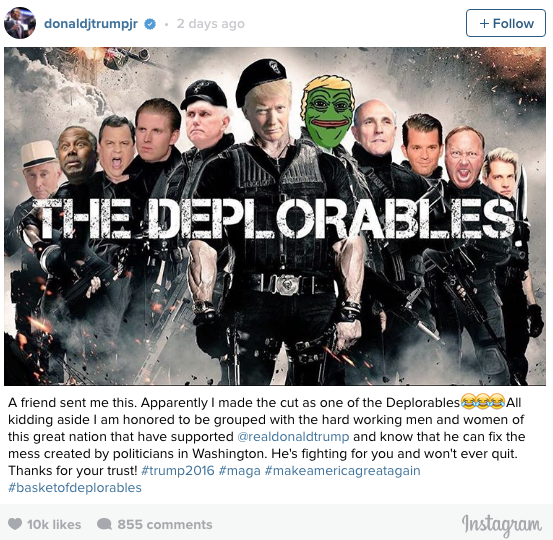 The image, which shows Trump with some his notable supporters, also features the “Pepe the Frog” meme. Otherwise known as the “sad frog” and the “feels good man” frog, Pepe was created by artist Matt Furie in his “Boy’s Club” comic.

As with any other internet meme, the image of Pepe has since been edited into various different likenesses with a wide array of different messages--including one of Clinton herself.

According to the Clinton campaign, however, the frog is a symbol of “white supremacy.”

Here’s the short version: Pepe is a cartoon frog who began his internet life as an innocent meme enjoyed by teenagers and pop stars alike.

But in recent months, Pepe’s been almost entirely co-opted by the white supremacists who call themselves the “alt-right.” They’ve decided to take back Pepe by adding swastikas and other symbols of anti-semitism and white supremacy.

“We basically mixed Pepe in with Nazi propaganda, etc. We built that association,” one prominent white supremacist told the Daily Beast.

Now white supremacists have given Pepe the cartoon frog some Trump hair—and the candidate’s own son says he is “honored to be grouped with” him.

The International Business Times UK even called the meme a “white nationalist mascot,” even though the meme and its various forms have been created organically by millions of people with different ideologies.

In an interview with the Daily Dot, Furie said, “[Pepe’s] certainly not racist, as he hangs with a bird-dog, a wolf-like creature, a semi-mutt person, and a dude with round ears that is possibly a muskrat or maybe a bear. These dudes don't even know what they are and it's not important cause they are all different and they are all friends. The online Pepe is just a reflection of things that people think are funny on the internet.”

Furie said the use of Pepe by the alt-right is “just a phrase” and that “no one will care about it come November.”