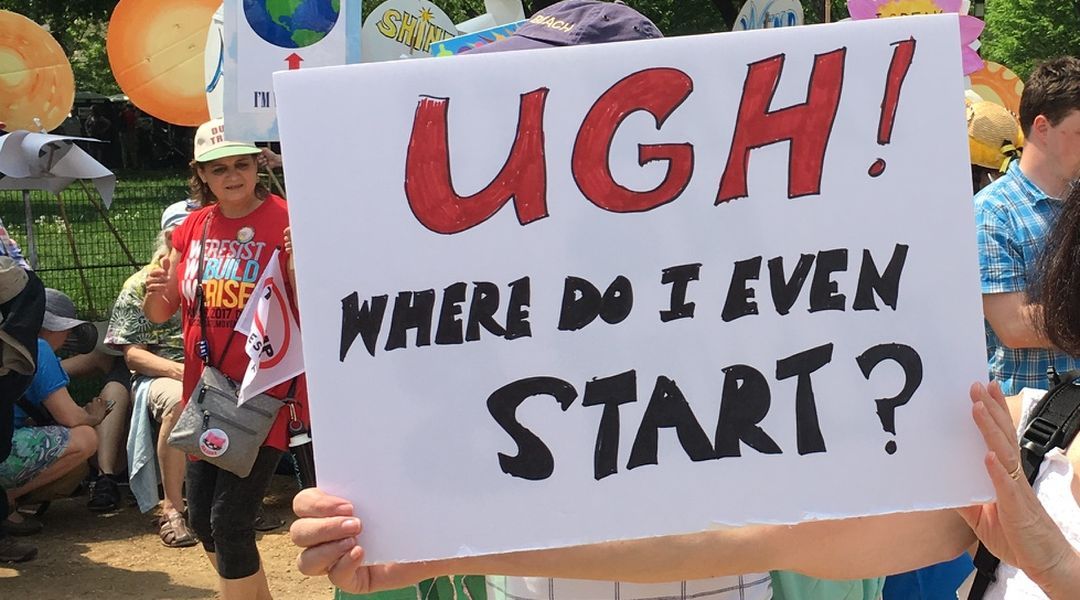 The People’s Climate March took place on Trump’s 100th day in office. The organizers on the People’s Climate March website cited the alleged success by “the resistance” to stop Trump from overturning the Affordable Care Act (which he still plans to do) and instituting a “Muslim ban” (which, although not a Muslim ban, is still in place) as reasons for rallying against the “attacks on our climate, our air, and our water.”

The speakers at the People’s Climate March included people such as GreenFaith, Empower DC, the SEIU, the NY State Nurses Association, and Black Lives Matter DC.

Sahar Alsahlani, a board member of the Muslim Women’s League and the Executive Council of Religions for Peace USA, acknowledged the different religions in the audience, including the Zoroastrians and the Druids.

“I am here representing the keepers of the faith and moral consciousness and my—masha Allah, masha Allah—and my brothers and sisters, we affectionately refer to ourselves as the A to Z’ers: from agnostic to Zoroastrian,” Alsahlani said. “And most of us, we’re here today. And God has given us each a scripture, and according to our holy books—and we were all here today, most of us. I mean from the Pagans, to the Druids, to the Muslims, to the Episcopals, to the Methodists, to the Presbyterians, to the Hindus, to the Sihks, to the Buddhists.”

“Today was one of the coolest days ever because the mellow Buddhists, once they passed Trump hotel, even they booed, okay,” Alsahlani bragged.

Nate James, from the American Federation of Government Employees, Local 3331, called “what this administration is doing to us now” “an act of war.”

“These corporations, it’s all about the buck. That’s what it’s all about. The bottom line is dollars. But dollars do not trump people. People trump dollars. People over profit. We gotta get there. These cuts against America are cuts against the American fabric. These are attacks against the American public. If anyone else was doing what this government is doing to us now, what this administration is doing to us now, it would be declared an act of war,” James said.

To make the point that what is happening to the environment can be declared an act of war, James brought up sarin gas used in the Syrian civil war, and implied a similar chemical is being used on fruits in the United States.

George Martin, with the Martin Luther King Justice Coalition, began his speech by saying, “No more war. Stop the wars! Save the planet!”

Despite people allegedly instructing the climate marchers to clean up their trash at the end of the event, trash was reportedly left behind.