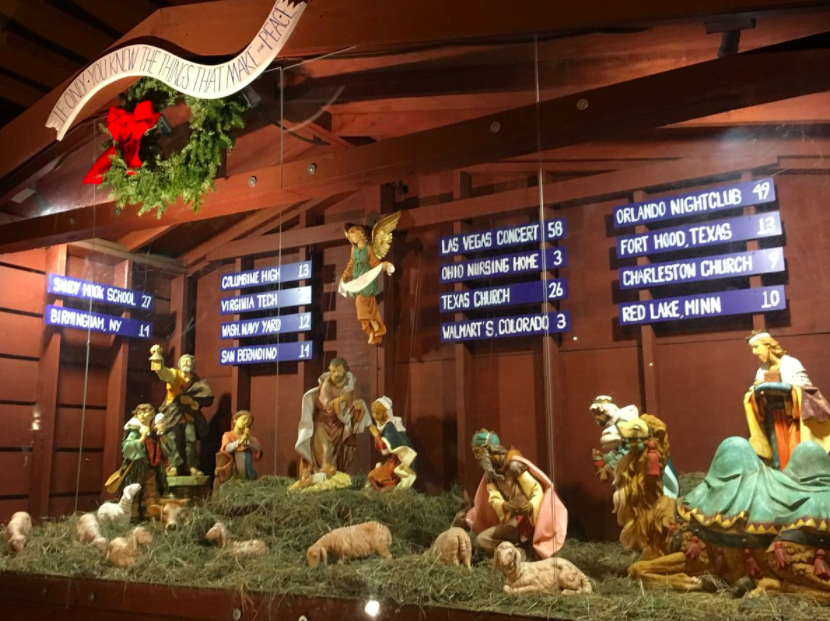 A Massachusetts church is using this Christmas season as an opportunity to push gun control.

St. Susanna’s Parish in Dedham, Mass., erected its nativity scene like it does every year, but this time surrounded by death tolls from mass shootings in recent years.

Behind baby Jesus, Mary and Joseph are blue placards with the locations of several mass shootings and their death tolls including Orlando, San Bernardino, Las Vegas and Sutherland Springs.

"If only you knew the things that make for peace," a banner above the manger reads.

Father Stephen Josoma explained that his church felt the need to do something because the conversation surrounding gun control “seems to be stagnated across the country.”

"This is not the picture of Christmas peace we want to have in people's minds for years to come,” said Josoma. “It can't be this forever, it just has to change.”

He hopes that the jarring scene will get people talking.

The display went up over the weekend. The church doesn’t expect everyone to like it but hopes people can keep an open mind, Boston 25 News reports.

Other churches have gone in the opposite direction in their responses to mass shootings.

Following the Texas church mass shooting in Sutherland Springs, Lighthouse Mexico Church of God in Oswego County in upstate New York encouraged its parishioners to bring their guns to its worship services.

Pastor Ronald Russell said that his church believes in the Second Amendment and that armed civilians are the best first defense.

“We say it again. We are not a gun-free zone,” the church warned on its welcome sign.

Another church in Florida, River of Tampa Bay Church, displayed a similar sign and posted the message on Instagram following the shooting.

For more on the nativity scene, check out the Boston 25 News report below.