Leave it to a country steeped in the execution of communist propaganda to praise the words of possibly one of the most pathological liars in American political history.

The Chinese Embassy in South Africa tweeted praise for former failed Democratic presidential nominee Hillary Clinton after the former Secretary of State blasted President Donald Trump on Twitter for his "racist rhetoric" in dealing with the novel coronavirus, also known as COVID-19.

Clinton tweeted last Wednesday about Trump's "failures" while dealing with the virus.

The president is turning to racist rhetoric to distract from his failures to take the coronavirus seriously early on, make tests widely available, and adequately prepare the country for a period of crisis.

China News, an outlet that the Daily Caller deemed "state-owned propaganda," also tweeted a copy of Clinton's tweet with a caption that doubled-down on what she wrote:

Former U.S. Secretary of State Hillary Clinton on Wednesday critiqued President Donald Trump's recent usage of "Chinese Virus" to refer to the #COVID19 as "racist rhetoric," which is an attempt to eclipse his poor response in curbing the virus outbreak. https://t.co/Yu07UjCzbi pic.twitter.com/V4ZV9zb2ho

What's even more peculiar about all of this is that the original tweet sent out by the Chinese Ambassador to South Africa Lin Songtian's Twitter account. However, the tweet has since been rerouted and directed to the Chinese Embassy to South Africa's account.

Here's what you now get when you go to Ambassador Lin Songtian's profile: 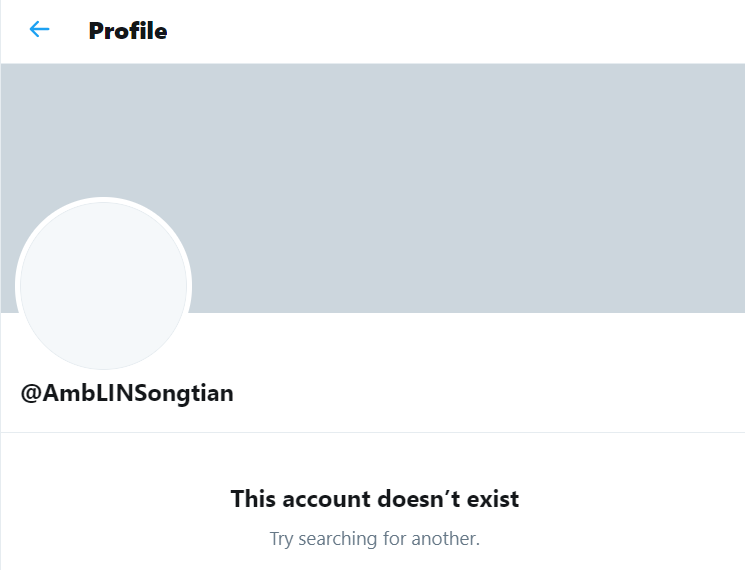 The ambassador posted a thread on Twitter Monday through the embassy's account thanking his South African hosts for their hospitality, but that he's been recalled to China during the outbreak of the virus.

My dear friends, with missing and reluctance, I am leaving this lovely country today back to China for a new position. Thank you for your kind attention and valuable support for me and my team to develop and promote China-SA relations.

Lin Songtian also wrote an op-ed for the South African outlet IOL reiterating that he will not only be leaving South Africa but assuming a new post once he returns to China, although he didn't give much in the way of details of his new post.

"Returning to China, I will assume a new post for a new chapter," he wrote. "I will continue to uphold the principles of sincerity, friendship, mutual respect and mutual benefit to contribute my humble efforts to promote the friendly exchanges and win-win cooperation between China and the world, especially with South Africa and other African countries, so as to jointly build a community with a shared future for mankind and a better future for all peoples around the world."

And just to reiterate the point, Chinese is a nationality, not a race. Asian is a race.