Chicago Vandals Trashed and Burned a Bust of Abraham Lincoln

We’ve all heard the saying, “Stupid is as stupid does.” Well, stupid apparently did a lot within the last couple days in Chicago.

Vandals in Chicago, who obviously have never read a history book, “damaged & burned” a 91-year-old bust of slave emancipator and former President Abraham Lincoln, according to a Facebook post by 15th Ward Alderman Raymond Lopez. 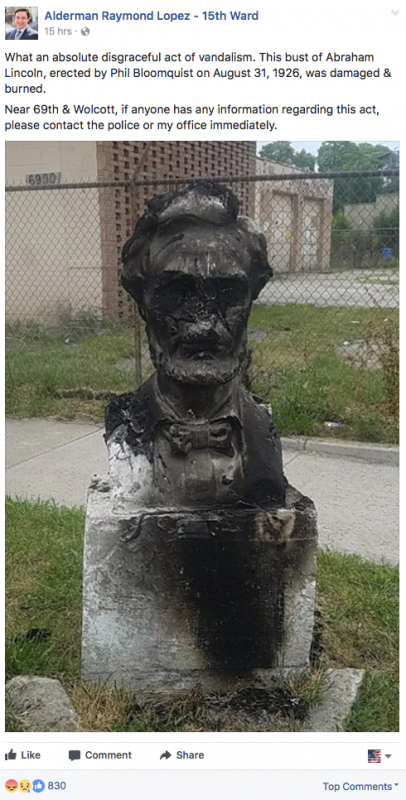 The vandalization of Lincoln’s bust comes after this past weekend’s divisive Charlottesville event, and after many “peaceful” protesters have been seen taking down Confederate statues across the country. Of course, it's not yet known which side of the political extremist fence these vandals are on, or if they just like burning stuff. But it's fair to say that torching the likeness of a U.S. president is a crap move, either way.

It would be fair to call these vandals idiots, but that would be an insult to actual idiots. This is what the U.S. will be facing for the foreseeable future, given the country is now inundated with ignorant people who sink to using low-IQ tactics to get their message heard.

Lopez hit the nail on the head with his assessment of the perpetrators of this heinous act: they are absolutely disgraceful to the human race.

Next, maybe they should think about how hateful an act can come across to people even if they don't agree with their point of view. Of course, that’s probably asking too much, since thinking before you act has never been the strong suit of criminals.