A flower shop says it's taking a stand against bigotry by refusing to allow people to place orders until they click a button indicating they “condemn racism, Nazism, and white nationalism.”

Flowers for Dreams, a Chicago-based flower shop that specializes in locally sourced flowers, is asking their prospective customers to make a choice: either condemn socially unacceptable views, or go somewhere else for their floral needs.

Upon opening the Flowers for Dreams website, users are prompted with a call to “condemn racism, Nazism, and white nationalism”:

Clicking “Yes, I can’t believe we’re still having this conversation” will show customers text that reads, “Thank you for speaking out against hate. We appreciate your business and hope you'll continue to take a stand against injustice” and a prompt that suggests donating money to the Anti-Defamation League, the United States Holocaust Memorial Museum, and Refugee One.

Clicking, “No, I'm ignorant and complicit in hate,” however, will tell users the shop doesn’t want their business. 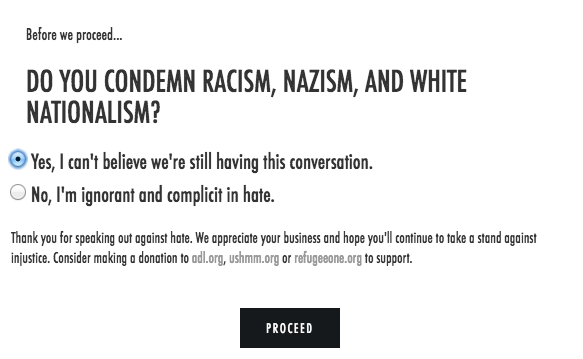 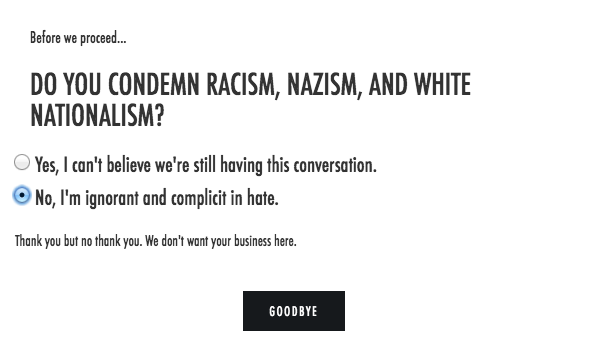 In its Instagram post unveiling the prompt, the shop page shows that hitting the “goodbye” option when refusing to condemn the hate groups will refer users to the United States Holocaust Memorial Museum.

In a statement in Crain’s, CEO and founder of Flowers for Dreams Steven Dyme, says, “This shouldn't be controversial.”

“Our plan is to take a firm, vocal stand, like Merck CEO Kenneth Frazier did today by resigning from President Donald Trump's American Manufacturing Council after Trump failed to rebuke white nationalists over the weekend,” Dyme continues. “I'm asking you to consider doing the same. The way I see it, our duty as business leaders is to set the tone. To be clear and up at the front, not hiding or cowering in the back.”

Speaking to DNAinfo, Dyme said Progressives feel like their views are “under attack” after the protest in Charlottesville.

"People feel a little more vulnerable about their ideas…,” Dyme told DNAInfo. “We want to reinforce and reiterate our values that we shouldn't feel like we're under attack. These are shared values from many, many, many people — the vast majority.”

“Our customers tend to use their dollars to express their values,” Dyme continued. “We want to be a leader in that. [Rejecting Nazism] is not that controversial.”