According to a chart compiled by the Senate Subcommittee on Immigration and the National Interest, the United States resettles more migrants than 21 Latin American nations combined.

Based on the most recent data available from the United Nations, the Senate subcommittee found that the U.S. took in approximately 46 million migrants in 2013 – about 20 percent of the world’s global migrants and nearly six times as much as every Latin American nation put together. 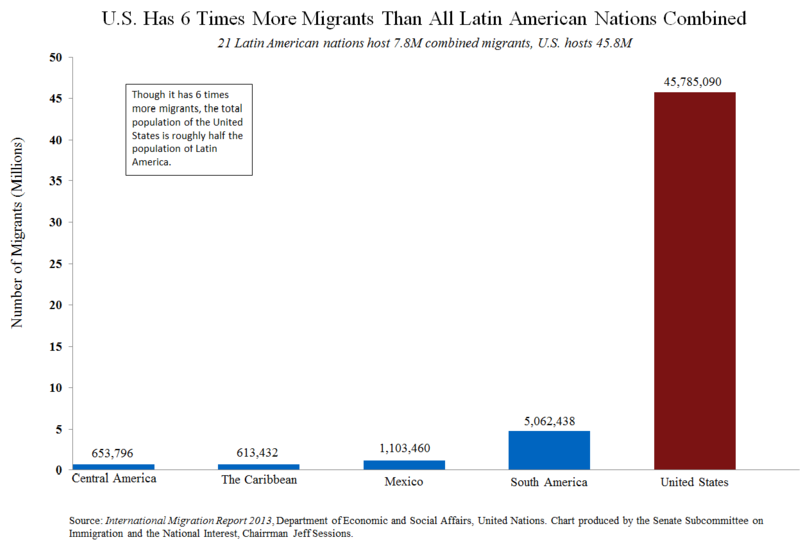 “While the United States takes in one-fifth of global migrants, no other nation on earth has taken in more than one-twentieth.”

This information has become even more salient in light of the current Syrian refugee crisis.

According to a report by the Pew Research Center, the U.S. does and will continue to exceed Latin America in migrants from the Middle East:

“The number of Muslims in the 51 countries in the Americas is projected to more than double in the next 20 years, from 5.3 million in 2010 to 10.9 million in 2030... Most of the projected growth in the region’s Muslim population will take place in North America, particularly in the U.S. and Canada."

“If current trends continue, about 130,000 Muslims are expected to be granted permanent residency in the United States annually by 2030.”

These numbers do not take into account President Obama's plans to accept over 10,000 Syrian refugees in the next fiscal year.

A recent survey revealed that only 26 percent of American adults think the U.S. should accept more Syrian refugees.