I’m convinced the president does certain things in a certain way just to watch others melt down for no particular reason. If the always-need-something-to-complain-about left weren’t triggered the last time President Donald Trump hosted a national championship football team, they are now.

Trump welcomed NCAA Football Championship Subdivision winners, the North Dakota State University Bisons (NDSU), to the White House on Monday and catered the event with a familiar theme to it.

NDSU entered the East Room in the White House to find McDonald’s burgers, much like NCAA Division I Football Subdivision national champions the Clemson Tigers enjoyed during their White House visit. But, Trump added items from fellow fast-food chain Chick-fil-A.

NDSU Football’s Twitter page posted some of their experience visiting the White House:

The Bison are in the East Room awaiting the arrival of President Trump. #NDSUinDC pic.twitter.com/Qb1gyvdxgg

Easton Stick presented the #45 jersey to President Trump in the State Dining Room followed by a quick lunch. Next stop, the Oval Office! #NDSUinDC pic.twitter.com/qdFVODhEej

Right on cue, leftists had to give their two cents because #OrangeManBad: 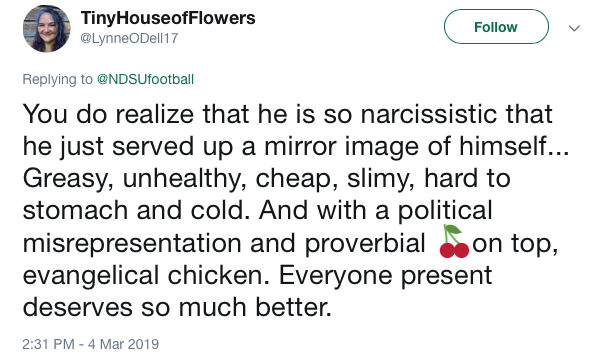 The Grand Forks Herald noted that none of the NDSU players opted out of the trip to the White House for political reasons.  NDSU football coach Matt Entz spoke about the trip being a bonding experience for those involved.

“We addressed it,” Entz told the Herald. “This isn’t a political trip, this is a Bison trip and, personally, I sold it as two things: It’s one more opportunity for the 2018 team to be together, but also in my mind the start of the 2019 season and the things we’re going to do together.”

For video of the event, watch below: