When is freedom of speech just a slogan?

When is intellectual consistency a burden?

When is language not a tool to facilitate human interaction and the pursuit of truth, but a tool to demonize others and hide the truth?

Always -- if one subscribes to the postmodernist-collectivist mindset of the Western elitists that is commonly evinced in government, major pop entertainment, and university “education”.

Case in point: Georgetown University, where the “student leaders” of its Georgetown Lecture Series -- a series supposedly run to promote freedom of speech and academic excellence --  have decided that free speech, consistency, and language are all tools to be manipulated for political ends.

As Dalton Nunamaker writes for The College Fix:

A new policy recently announced by the student leaders of Georgetown University’s Lecture Fund speaker series declared ‘oppressive language… is violence’ and pledged half its coffers for the upcoming school year to amplify ‘black voices.’

Which presents a few problems. First, how can language be oppressive or violent?

This ties to the long-fought War on the West that postmodernist collectivists have waged, often with the fallow, pseudo-intellectual weapons of “semiotics” and “deconstructionism”, wherein teachers, professors, media chatterboxes, publishing overlords, and politicians make intellectually vacant, empirically unsupported, claims about words, the use of words, and all written, spoken, or visual art. 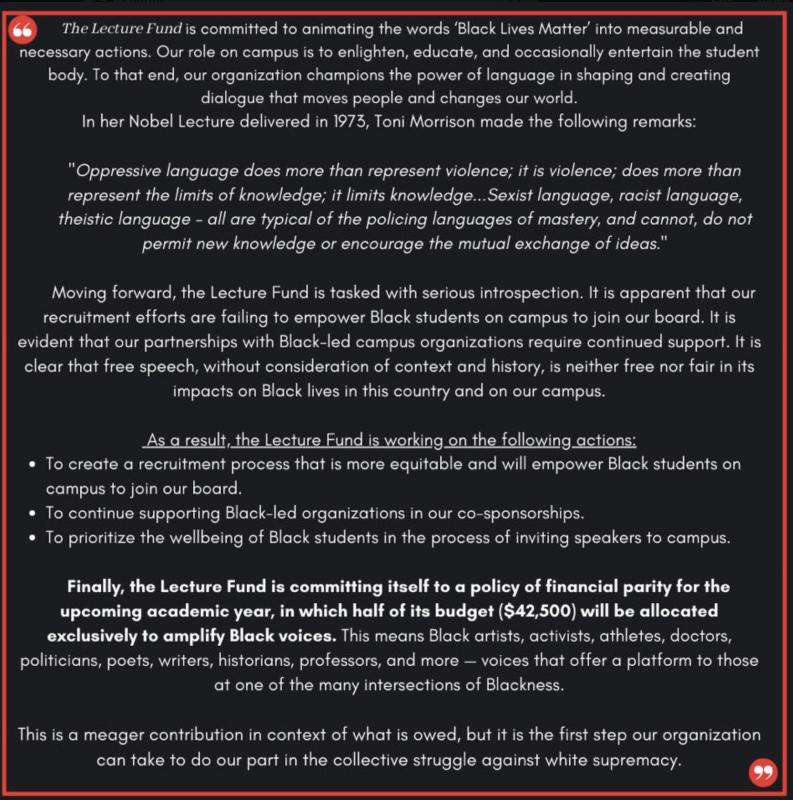 The collectivists then use those newly “defined” words and claims about written or spoken pieces and their creators to build a larger framework of “societal imbalance”, “unacknowledged prejudice”, and “structural racism” – which can only be fixed by real institutional racism instituted through government policy (but DON’T TALK ABOUT THAT).

As Nunamaker observes, the Georgetown Lecture Series is supposed to promote free speech and the atmosphere of academia.

The tuition-funded Lecture Fund at the private Catholic university is described, however, as a “non-partisan student-run organization that exists to enrich the academic experience of the Georgetown community,” according to its website.

But since more and more choices in America are being decided and dictated by government, this lecture series has been subverted to promote postmodernist semiotics, to redefine words, and to effectuate action not through voluntary means, but through political action.

However, this mission seems to have changed due to the recent policy announcement via the fund’s Facebook and Instagram pages that it will use half of its annual $85,000 budget during the 2020-21 school year exclusively to amplify ‘black voices.’

And, as if the infantile swerve into racial assumptions isn’t enough…

The fund has pledged to ‘prioritize the wellbeing of Black students in the process of inviting speakers to campus’ because ‘it is clear that free speech, without consideration of context or history, is neither free nor fair in its impact on Black lives.’

Which reveals that Georgetown’s “Lecture” gang has reached the final stage of the postmodernist metamorphosis.

Free speech is not free speech. It is to be defined and controlled by the rulers, be they the mass or the vocal sect – a constant battle to claim “greater validity of context” that can be used to suppress other voices.

And free speech does not mean the equal right to express opinions, the universalizable concept that each of us can express an idea, and each of us is free to listen or turn away.

Not anymore. In classic Rousseauian fashion, “free speech” is now the adjudged “fairness of outcome” -- it is determined by the gang that, in order to “fix previous wrongs” will institute its own speech policing policies and overlook the fact that it engages in the same kind of systematic elitism it decries.

And, to cap it all off, the Georgetown Lecture Fund team quotes hardcore leftist Toni Morrison to support its new approach to “free speech”.

The post revealing the new policy quotes author and activist Toni Morrison to explain its new protocol. The quote reads in part ‘Oppressive language does more than represent violence; it is violence…sexist language, racist language, theistic language — all are typical of the policing languages of mastery.’

Let’s get a few things straight – things that a writer such as Ms. Morrison should have figured out long ago, but which she, and most of the leftist language literati promote without embarrassment.

Language is not violence and words are not “violent” in any way. They are tools, used for good or bad purposes. If used to defame and lie, the victim can cite the user for the wrongs, but the words themselves are not violent the same way a baseball bat is not violent but can be used for violent purposes.

It is the witch-doctor-like postmodernist practice of applying new, politically operative, untrue “meanings” to words that is aggressive and brings us to this point. And it’s a point that is self-defeating, for it eliminates the very meaning of language itself. It kills the ability to use any words – even the words used to re-label the old words – in discourse without those words being targeted as “evil” and “violent”.

And, the ironic punctuation mark on the whole implosive endeavor is that this Georgetown group should quote Morrison’s claim that “theistic” language – of all things – is “violent”.

Georgetown is a Catholic university.

Perhaps these students might want to recall Genesis tells of a time and place where men tried to create an artificial, unnatural construct, to adopt the pretense of being like God. It was called The Tower of Babel, and, because of their folly, men were made to speak different languages, to be unable to communicate with one another.

Jehovah scattered them from there over all the surface of the earth, and they gradually left off building the city. That is why its name was called Babel, because there Jehovah had confused the language of all the earth.

Free speech is the exact opposite.

It is universal, and comes with no pretensions to play God and tell someone else what he or she means.

Postmodernism has never shown this.