Those on the left, particularly in this case the Hollywood Communistic Cult, seem to be the very people they pretend to oppose — fascist censors.

Cancel culture claimed another victim — a term which I hesitate to use, because the person in question would never consider herself as such — after Lucasfilm released a statement Wednesday evening announcing that “The Mandalorian” actress Gina Carano “is not currently employed by Lucasfilm and there are no plans for her to be in the future,” according to Deadline.

The last straw for Lucasfilm seemed to be a social media post in which Carano compared the current cancel culture climate to Nazi Germany.

Jews were beaten in the streets, not by Nazi soldiers but by their neighbors…even by children. Because history is edited, most people today don’t realize that to get to the point where Nazi soldiers could easily round up thousands of Jews, the government first made their own neighbors hate them simply for being Jews. How is that any different from hating someone for their political views.

According to the United States Holocaust Memorial Museum (USHMM):

But even Germans who did not share the extreme Nazi belief that “the Jews” were a source of “racial pollution” participated in varying degrees in Jewish persecution. For instance, members of sports clubs, book groups, and other voluntary associations expelled Jews. Teenagers within schools and universities enjoyed their newfound freedom to harass Jewish classmates or even adults. Many ordinary Germans became involved when they acquired Jewish businesses, homes, or belongings sold at bargain prices or benefited from reduced business competition as Jews were driven from the economy. With such gains, these individuals developed a stake in the ongoing persecution.

The hypocrisy of Lucasfilm doesn’t appear to extend to “The Mandalorian” star, actor Pedro Pascal.

Pascal posted the following tweet in 2018 comparing immigrant children detained at the U.S./Mexico border to victims being held in Nazi concentration camps: 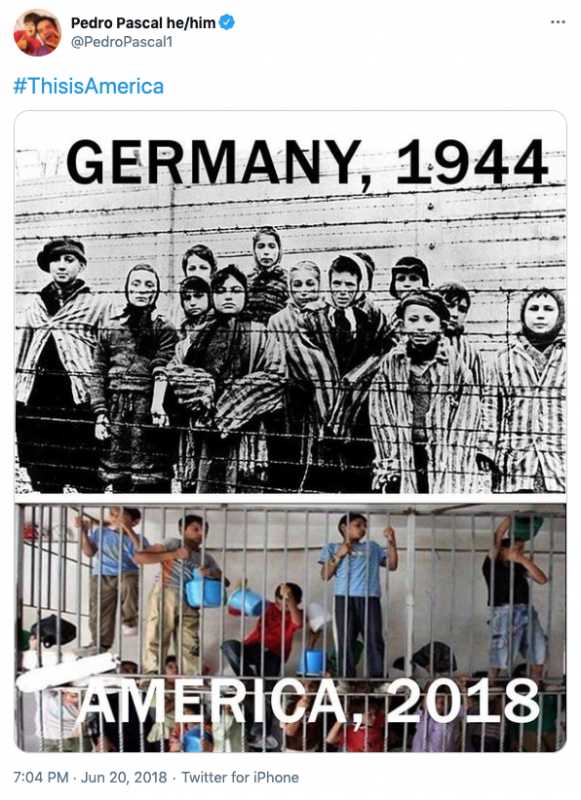 No word on when Pascal will be removed from the show by Lucasfilm. (Pro-tip: He won’t be.)

The hypocrisy also doesn't seem to extend to Disney, who owns Lucasfilm.

When Disney released the live-action version of "Mulan" in 2020, the company thanked "government entities in Xinjiang, the province where Muslims have faced human rights abuses" in the credits of the film, according to CNBC. In more honest words, Disney thanked the communist Chinese province that literally has concentration camps.

Carano’s popular portrayal of bounty hunter “Cara Dune” on “The Mandalorian" conflicted the more delicate “Star Wars” fans once her support of former President Donald Trump was revealed to the public, as well as her belief that voter fraud affected the results of the 2020 presidential election.