Grimes is choosing not to reveal the sex of her baby – and she has every right not to share that private information with the public.

The 31-year-old Canadian singer and producer made the reason behind her decision known, however, during a YouTube livestream on Friday in response to a fan’s question:

“I don’t want to say the gender of the baby … because I feel like their privacy should be protected,” Grimes said. “I don’t think they can consent to being famous or being in public. And I don’t want to gender them in case that’s not how they feel in their life."

"I don’t know, I just feel like it doesn’t need to be known,” she went on.

Grimes, who is seven months pregnant with her first child, later took to Twitter and responded to a similar question from a fan, saying, “They may decide their fate and identity.” 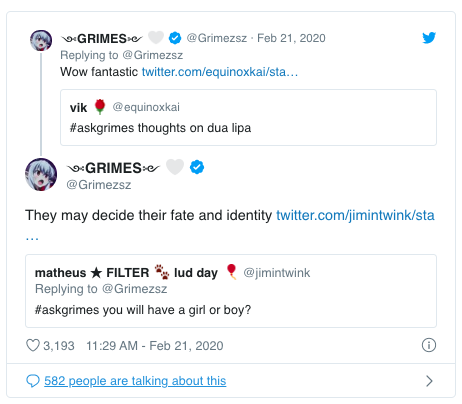 The eccentric pop singer known for hit songs "Oblivion" and "Delete Forever" has been in an off-and-on relationship with Tesla CEO Elon Musk since 2018 who is rumored to be the father.