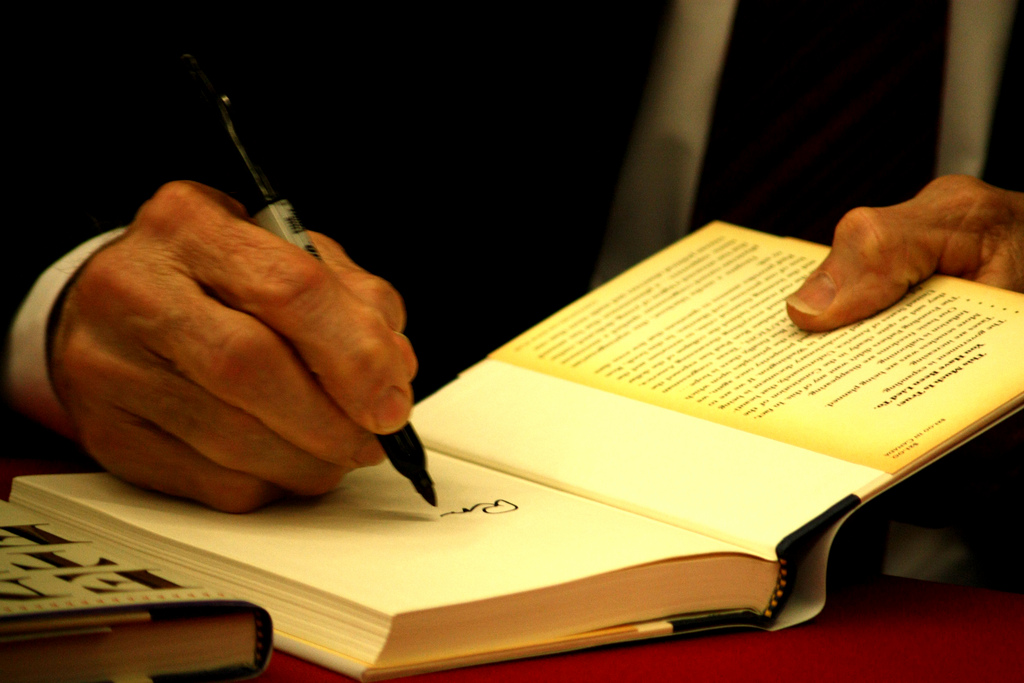 So, I’m a writer. Hopefully, that comes through not only in the fact that I’m setting caveman fingers to keys, and you’re reading the results, but also in the quality of what I write, the idea that it has value. I write non-fiction on political economics and ethics. But what some folks don’t know is that I also write scripts, short stories, novels, and novellas. As a result, I’ve become familiar with how publishing works, and have become friends with a number of terrific authors.

Many of those truly fantastic writers don’t have the backing of big-name publishing houses. Some sign with small “indie” publishers, while others split from the old guard and self-publish. And what every author, even the well known who have the backing of promotional departments, will tell you is that personal, hand-to-hand and word-of-mouth connections are what sells books.

As a consequence of this, making appearances -- at conventions and at book signings offered by local booksellers – is not only essential for authors to exist in the pro field, but the crowds these events generate are also important for the bookstores to stay in business.

But, on January 1, an amendment to a California law kicked into effect that makes it virtually impossible for authors and booksellers to conduct “book signings” the way they once did. And only the folks of the Pacific Legal Foundation, hired by an indie bookseller based in San Francisco, are fighting it.

The amendment, which is intended to stem the tide of “unlicensed” movie and sports memorabilia (it won’t, because a black market already exists), lassos books, authors, and booksellers in the legal rope as well, and requires booksellers to conform to all kinds of mandates written by politicians, or face hundreds of thousands of dollars in fines.

As Bill Petrocelli, plaintiff and co-owner of Book Passage, based in San Francisco, told 5KIPX:

“This law is so draconian it’s hard to believe anyone could comply… It requires incredibly voluminous record-keeping. If we had to do everything this law requires, it would bankrupt us.”

And as Pacific Legal Foundation attorney Anastasia Boden notes, the list of mandates is long and tedious. Here is what California requires of booksellers who want to sell autographed books, including books sold at author appearances in their stores, or books autographed by the authors, then left for the public to browse and buy at their leisure. Store owners must:

This is not a joke. In fact, not only do the booksellers have to be prognosticators who try to predict if there will be future editions, it’s safest to make sure the witness to the signing is not an employee of the bookseller. That means the bookseller will ask customers to sign as witnesses. Think of it: as customers attend book signings, they will themselves end up signing legal documents.

And all of these records must be kept for seven years. As Ms. Boden also astutely observes:

Failure to disclose any of the required details, or to keep the certificate for the full seven years, results in outrageous penalties. Even an inadvertent omission can subject a seller to actual damages, plus a civil penalty of up to 10 times the damages, plus court costs, plus reasonable attorney’s fees, plus expert witness fees, plus interest. Professional plaintiff’s lawyers must be chomping at the bit. If Bill (Petrocelli) sold just 100 signed copies of a $30 book, but six years later, couldn’t locate the records noting the size of the edition, he’d be liable for (at minimum) $30,000. Bill sells tens of thousands of signed books each year.

The statute was written at the behest of actors like Mark Hamill, who are trying to decrease the trade in fraudulent autographed memorabilia and second-hand autograph sellers.

But there are already common law statutes in place against fraud. Additionally, unless a verbal or written contract prohibiting resale has been agreed to at the moment a fan buys a celebrity autograph, then the piece of memorabilia becomes the buyer’s property, and he or she should be able to do with it as he or she wishes. It’s not the place of the state to police every baseball card or star photo trade made by a kid or an adult.

The practical outcome of this law will be disastrous for writers, bookstore owners, and readers. Authors will find it more difficult to sell their books in person, and book signings in California will end or go black market.

Petrocelli and Pacific Legal are suing for an injunction on First Amendment grounds, arguing that authors have a right to sell written documents as they see fit, without having to conform to prior restraints by politicians, and on Fourteenth Amendment grounds that the law does not “equally protect” buyers from online sellers the way it “protects” buyers from brick and mortar stores.

As an author, I, like many of my friends, will watch this case closely. We expect a decision in a few weeks.

Its outcome could decide whether we do more or less business in California, and whether or not the book industry is burdened by even more political mandates in a supposedly "free" country.