A church in California is making waves this week for its nativity display depicting Mary, Joseph and Baby Jesus locked inside cages topped with barbed wire to make a political statement about immigration.

Claremont United Methodist Church just outside Los Angeles posted a photo online of their display, in which baby Jesus, who’s wrapped in a silver foil blanket, and his parents are separated by detention fences. 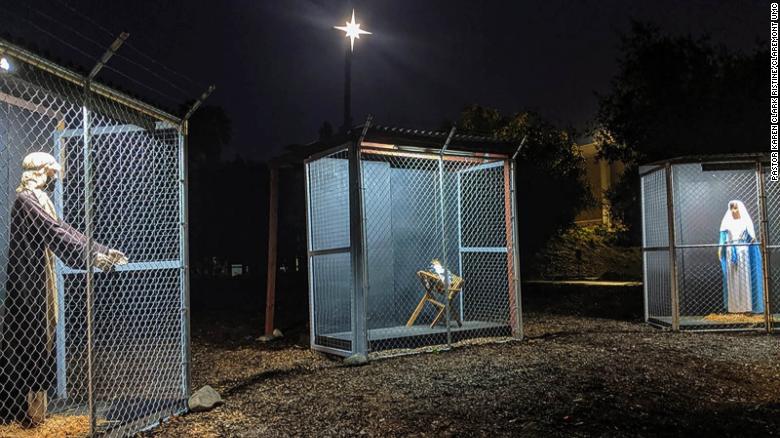 “In the Claremont United Methodist Church nativity scene this Christmas, the Holy Family takes the place of the thousands of nameless families separated at our borders,” Claremont Pastor Karen Clark Ristine posted on Facebook, saying she was “stirred to tears by the display” that also featured a reunited Holy family inside the church.

“The theological statement posted with the nativity: In a time in our country when refugee families seek asylum at our borders and are unwillingly separated from one another, we consider the most well-known refugee family in the world. Jesus, Mary, and Joseph, the Holy Family,” Ristine continued. “Shortly after the birth of Jesus, Joseph and Mary were forced to flee with their young son from Nazareth to Egypt to escape King Herod, a tyrant. They feared persecution and death.

“What if this family sought refuge in our country today?” she asked. “Imagine Joseph and Mary separated at the border and Jesus no older than two taken from his mother and placed behind the fences of a Border Patrol detention center as more than 5,500 children have been the past three years.”

Claremont United Methodist isn’t the first church to come up with a progressive spin on the birth of Christ in an effort to make a political point. Last year, St. Susanna’s Parish in Dedham, Massachusetts put up a Nativity display showing baby Jesus in an ICE detention cage while the three Wise Men looked on through a border fence with a “Deportation” sign and a marker that read, “Peace on Earth?”