If you are in the U.S. illegally — and you want to be counted as part of the population — you should have to indicate that you are in fact in the country illegally.

And since sanctuary cities don’t give a crap about who inhabits their towns, I don’t see what the big deal is.

Federal officials announced a plan to include a question on citizenship status in the 2020 Census in order to aid enforcement of the Voting Rights Act on Monday. The question of illegal immigrants voting in U.S. elections has been a hotly debated topic since before the 2016 presidential election.

However, California had to get put their two cents in, since they’re essentially a sanctuary state.

According to Fox Business:

The State of California, which has a large immigrant population, responded early on Tuesday by filing a lawsuit in federal court against the commerce department and census bureau.

California Attorney General Xavier Becerra asked the U.S. District Court in the Northern District of California to issue a preliminary injunction and rule that the move violates the constitution by interfering with the obligation to conduct a full count of the U.S. population.

Becerra noted in a tweet that he believes including the citizenship questions "is illegal" somehow:

Becerra even tweeted a copy of the front page of the lawsuit: 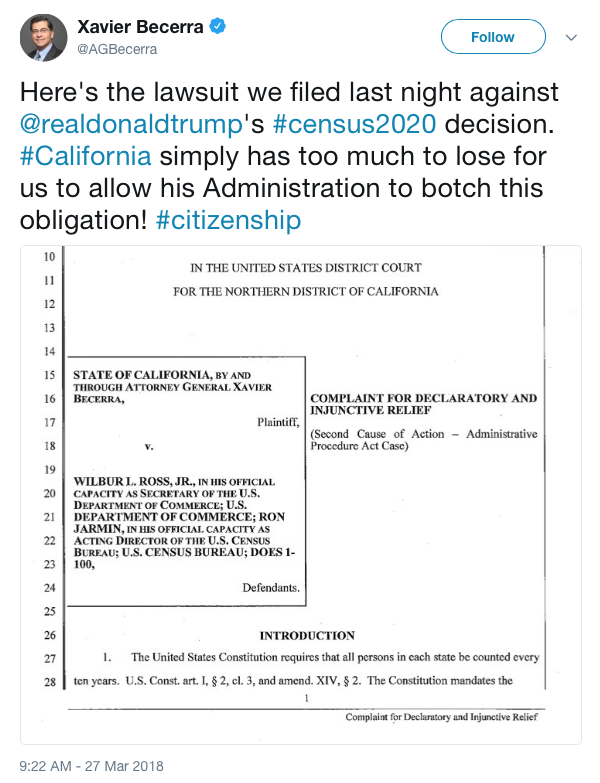 What obligation? Judging by Becerra’s lack of wanting the citizenship question included in the 2020 Census, it seems as though he’s lobbying for less obligation to the country that finances the state.

Also, what does California have to lose by including this question? More federal dollars? A safety net from the federal government for all of the irresponsible spending the state does?

Becerra and his ilk act like this has never happened before, but it has.

The long form version of the 2000 Census included a series of questions that helped determined what the citizenship status was of the person taking part. The long form was “distributed to one in six people in the U.S.”

As a matter of fact, U.S. Department of Commerce Secretary Wilbur Ross wrote in his report to Under Secretary for Economic Affairs Karen Dunn Kelley on Monday that citizenship questions were part of the Census “up until 1950, and Census Bureau surveys of sample populations continue to ask citizenship question to this day.”

Other detractors of the move make no sense in their assessments of the situation.

“This untimely, unnecessary, and untested citizenship question will disrupt planning at a critical point, undermine years of painstaking preparation, and increase costs significantly, putting a successful, accurate count at risk," the Leadership Conference on Civil and Human Rights said in a statement.

Unnecessary? How is it unnecessary to want to count all of the people in the country and denote whether someone is here legally or not?

Untested? We already debunked that.

How can an accurate count be put at risk by adding more questions? If anything, more details would give you more accuracy as to the context of people living in the U.S., not less.

These people attempting to block the move of adding the citizenship question to the Census are the same people who don’t think you should have to have identification to vote.

Maybe there’s something to California wanting to secede from the U.S. If they can’t get on board with things that would give us a better understanding of the problems facing immigration, then they might as well be a foreign nation.