President Trump issued a statement Monday evening announcing that the Philadelphia Eagles are “unable to come to the White House” because “they disagree with their President” over standing for the National Anthem.

The statement indicates that the Eagles still wanted to send a “smaller delegation” to the traditional White House visit for a Super Bowl-winning team but Trump believes the fans planning on attending the event “deserve better.”

The Philadelphia Eagles are unable to come to the White House with their full team to be celebrated tomorrow. They disagree with their President because he insists that they proudly stand for the National Anthem, hand on heart, in honor of the great men and women of our military and the people of our country.

The 1,000 fans that were planning on attending are invited to “a different type of ceremony” at the White House, “one that will honor our great country, pay tribute to the heroes who fight to protect it, and loudly and proudly play the National Anthem,” Trump writes.

Plagued by controversy since former San Francisco 49ers quarterback Colin Kaepernick began the National Anthem protests in 2016, the NFL recently approved a new policy ahead of the 2018 preseason that requires players to stand if they are on the field or face a fine. Players can remain in the locker room if they so choose.

Eagles defensive end Chris Long tweeted that the policy represents "fear of a president turning his base against a corporation" and lets fans "know where our league stands." 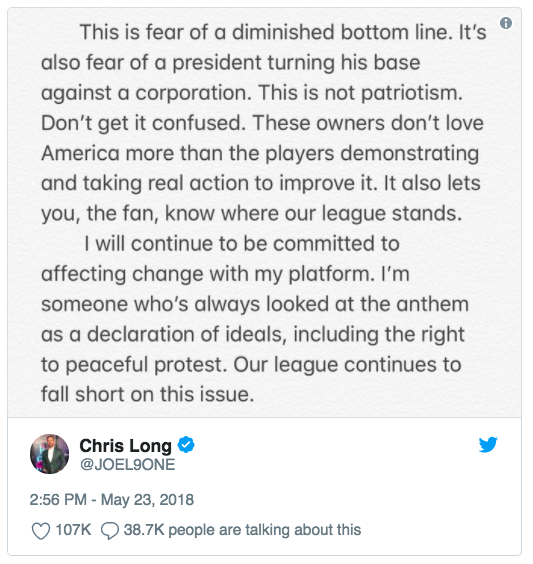 Other players including Long have said that they planned on skipping the event.

The President in September 2017 rescinded the Golden State Warriors' invitation to visit the White House after they won the NBA championship because star player Stephen Curry expressed to his team and the media that he did not want to go.