Forget the fact that Washington Nationals outfield superstar Bryce Harper set a Major League Baseball (MLB) record on Sunday by reaching a base seven times without registering an official at-bat. It's what one of baseball’s premier players did after the game is what people should be taking note of.

Following the Nationals 4-3 extra innings loss to the Chicago Cubs on Sunday, Harper boarded the team bus outside famous “Friendly Confines” of Wrigley Field. The 23-year-old Harper was then said to get off the bus and hand a jar full of money to a homeless woman sitting with her dog across the street from the right field wall on Sheffield Avenue.

A man on Twitter reposted a tweet supposedly sent out by a woman who said she worked security for the visiting team’s bus after the game. 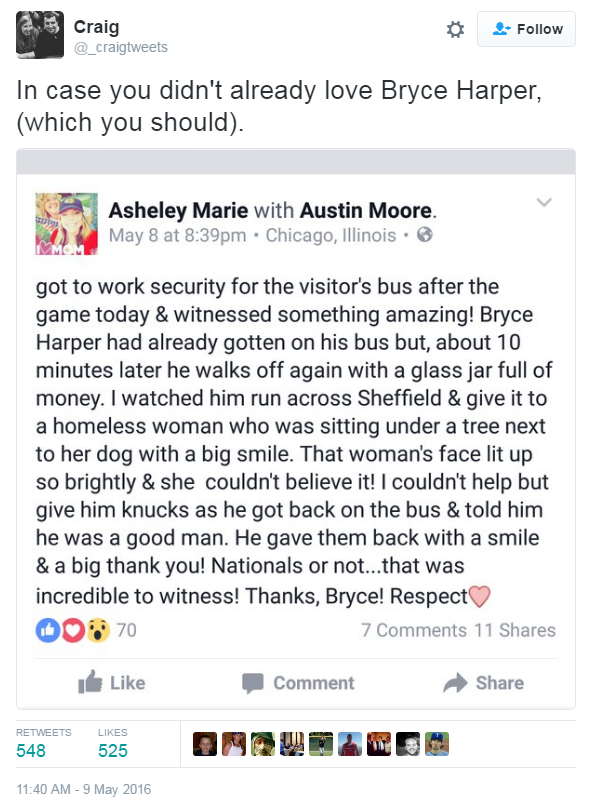 The story was then confirmed by Chelsea Janes, who covers the Nationals for the Washington Post.

For those wondering how Harper reached base seven times without recording an official at-bat, Harper was walked six times and hit by a pitch once in the 13-inning affair on Sunday. Harper was walked 13 times in the Nationals' four-game series with the Cubs, setting an MLB record.

Maybe the Cubs' charity in giving Harper first base seven times rubbed off on him.