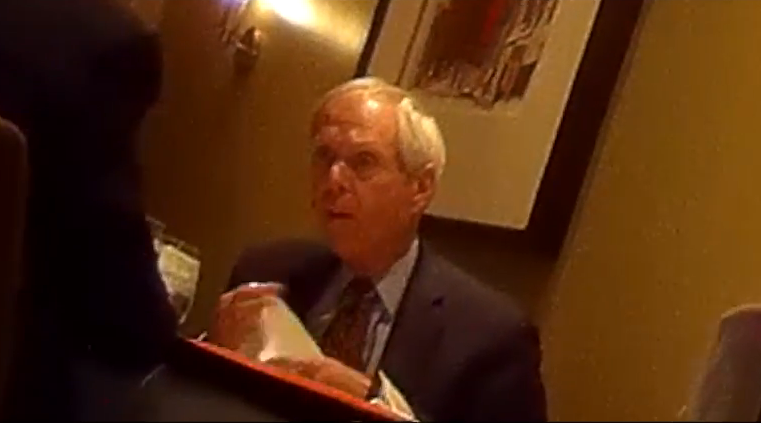 In the beginning of the video, Creamer said the following:

I’ve known the president since he was a community organizer in Chicago […] Every morning, I am on a call at 10:30 that goes over the message being driven by campaign headquarters […] I do a lot of work with the White House.

O’Keefe then claims the Clinton campaign violated Federal Election Campaign (FEC) coordination laws. He alleges they sent a fake possible donor, named Charles Roth III, to speak with members of Americans United for Change (AUFC), another organization working with the Clinton campaign, to see how they would go about helping a “donor” who wanted to stop Donald Trump from winning the presidency.

“Roth” spoke to Creamer about donating $20,000, and also inquired about how to affect Trump campaign events.

Creamer told the undercover journalist posing as a donor to send a check to AUFC. O’Keefe reported Creamer was listed as AUFC’s general consultant, but after the first two videos released by PVA, Creamer’s name was removed from the website, despite Creamer admitting to being the consultant.

Once AUFC confirmed that they had received the $20,000 donation from “Roth” through the Belize offshore account, PVA decided it was time to dig deeper. Another undercover PVA journalist set up an internship with Democracy Partners and worked with Creamer.

The now former national field director for AUFC, Scott Foval, talked with a representative for “Roth” about how “Roth” could get further involved.

“If he wants to get dirty, we can get dirty,” Foval said.

Foval then set up a meeting with Cesar Vargas, illegal alien and founder of the Dream Action Coalition, in order to determine what could be done to affect the election in terms of voter fraud.

“What’s the goal of the campaign right,” Vargas posed. “Yeah and for me I totally get it, this is illegal, this is something that can be done.”

To find out how far people like Creamer, Foval, Vargas and AUFC president Brad Woodhouse would go with “the promise of more money,” PVA set up a fake “money man” for “Roth,” named Michael Carlson.

PVA then had “Carlson” talk to Creamer about a fictitious wealthy client in Syria who wanted to live in the U.S.

During the phone meeting with “Carlson,” Creamer said:

I just need to, I will try and find a couple of good referrals to you and get back to you pretty quick then. Okay? On the first…Well, I’ll just talk to…the guy I’m going to talk to first, to see if this is up his alley, the first thing is up his alley. It’s the guy who ran the campaign for President Obama. He has a firm that’s pretty well connected.

One of the undercover journalists for PVA mentions how a wealthy Atlanta woman wanted to make a donation to the inauguration as long as she could meet Clinton should she get elected. The motivation behind this request was to see if the Clinton campaign was open to “pay-for-play” donations.

Creamer responded, “Okay, I’m sure that can be arranged and how do you want to proceed, how should I proceed here?”

The shocker of why the $20,000 was mysteriously returned led back to the direction of Woodhouse. O’Keefe claims that once Woodhouse learned of the future release of the undercover videos, the money was wire returned back to the offshore account in Belize with Woodhouse claiming suspicion of a foreign donation.

For the fourth “Rigging the Election” video, watch below: