Brandeis U’s Speech Code Is So Woke, The Term 'Trigger Warning' Is Verboten, Because It Contains 'Trigger'

Located just outside leftist enclave Boston, Massachusetts, and named after left-tilted Supreme Court Justice Louis Brandeis, who sat on the bench from 1916 to 1939, Brandeis University is known – even around the lib-filled city – as one of the most prominent promoters of collectivism in America. And now, it’s administrators have become so ”woke” that their own politically correct “speech code” has become a self-consuming parody.

Entitled “Violent Language,” and found on the school website within its “Prevention, Advocacy, and Resource Center,” this list of “violent language” contains three columns. First, there’s “Oppressive Language,” followed by “Possible Alternatives,” and, finally, the brilliant Brandeis team shows us the “Explanation” for each.

The “Oppressive Language” list is not in alphabetical order, and it doesn’t seem to be hierarchical. In fact, in viewing it, one gets the sense that the list was composed by a student hacker as a joke, or that it was created in ten minutes by a freshman looking for extra credit. But it undoubtedly will be taken seriously by a cadre of the population already susceptible to dumb ideas, and so we’ll analyze what they’re pushing.

In that left column – the “Oppressive Language” list -- we see terms like, get this, “Killing It,” which Brandeis suggests should be replaced by “Great job!” and “Awesome” because, as the school “explains” in the typo-filled “third column”, “If someone is doing well, there are other ways to say so that (sic) equate it to murder.”

Proofreading must be "triggering" to the folks at Brandeis.

And the idea of killing a virus must be scary, too. 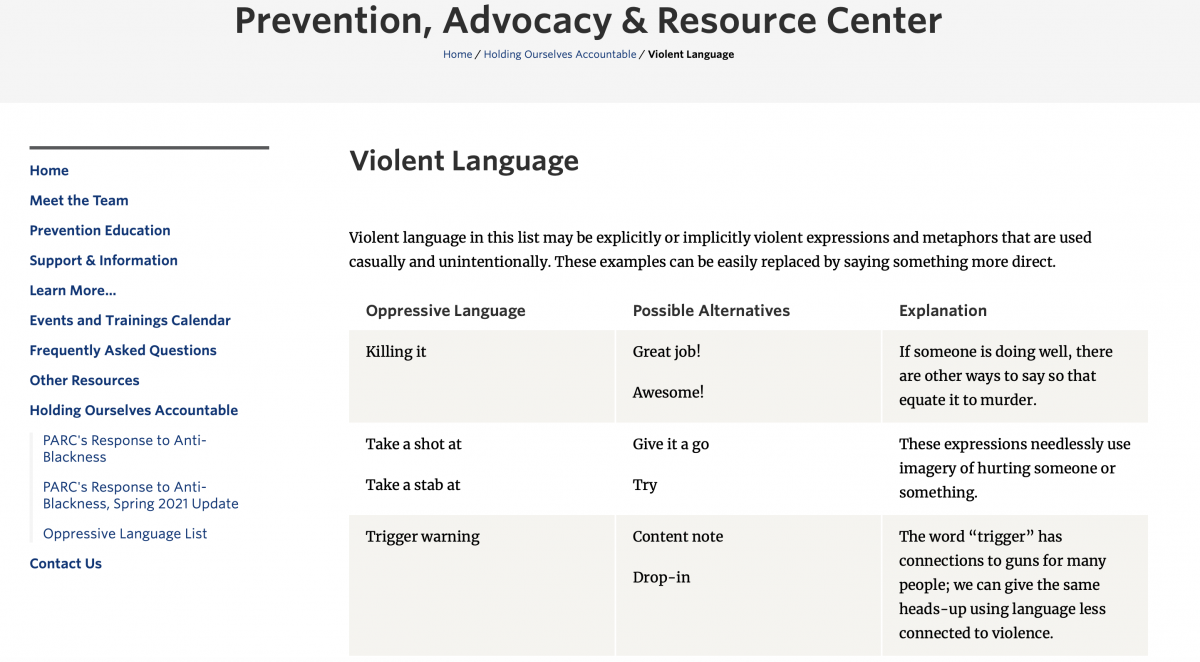 Related: British Speech Police Ready to Prohibit 'Gender Stereotyping' in Ads, US Not Far Behind

Then there’s “rule of thumb,” which, they tell us, should be discarded and replaced by the term “general rule,” because, “This expression allegedly comes from an old British law allowing men to beat their wives with sticks no wider than their thumb.”

The school is being generous by using the term “allegedly,” since, for centuries, etymologists and historians have shot down the errant claim that the term “rule of thumb” has anything to do with such a law – because there is no record of an “it’s okay to beat wives with sticks” statute in English history.

Then there’s “picnic,” which the speech police tell us should be replaced by “outdoor eating,” as if we’re still trapped in the COVID-Crackdown madness of politicians and bureaucrats telling restaurateurs to only serve people outside or else police will fine and arrest them.

Why ban “picnic?” Well, the school reiterates the already debunked nonsense that, get this, “The term picnic has been associated with lynchings of Black people in the United States, during which white spectators were said to have watched while eating, referring to them as picnics or other terms involving racial slurs against Black people.”

Of course, a year ago, Reuters – no bastion (can one use that term any more?) of “right-wingers” – published its debunking of this, stating:

According to Dr. David Pilgrim, author of several books on the history and cultural symbols of the Jim Crow era, the word picnic derives from the 17th century French word ‘pique-nique,’ a term used to describe a social gathering in which attendees each contributed with a portion of food or another useful item (here).

Pilgrim writes that a 1692 edition of Origines de la Langue Francoise de Menage includes the word pique-nique. Since the derivate word, picnic, did not appear in the English language until around 1800, this suggests it did not originate in the U.S.

But, hey, why bother with etymology when progressivism encourages the redefining of words so that one can attack those who use them, and, of course, one works at Brandeis, a big player in the “progressive” university cabal?

Brandeis offers numerous other words that should be “verboten” on campus, a-la “Newspeak” and “Double-Think” from George Orwell’s “1984,” but perhaps the most revealing of is the push to place on its list of triggering terms the very term “Trigger Warning.”

Indeed. As you might guess, “Trigger Warning” contains the word “trigger,” which might be, er… triggering to some people because of its association with guns and the mythology that guns are responsible for the bulk of American violent crime. Don’t bother telling the Brandeis gang that firearms are used far more often to stop violent crime than to engage in violent crime, and don’t tell them that armed civilians stop crimes more often than police (because police typically arrive after a crime has been reported).

And don’t upset the Brandeis crew by telling them that University of Michigan’s IT department already beat them to the punch (sorry, was that TRIGGERING?) in 2020 by publishing its list of “bad language” that included “picnic” and even the term “brown bag” lunch.

They seem quite content to wallow in their wokeness, so much so that they’re now engaging in self-defeatism. They are pushing censoriousness to such an extreme that the former extreme – offering “trigger warnings” on books, videos, photos, or audios that some snowflakes might use as excuses to hide in Mom’s basement – itself is unusable.

From the fundamental error of saying that there can be such a thing as “violent language,” Brandeis now has made the list of “triggering terms” so big that even “triggering” is part of the list.

It seems like the left is arriving at the logical conclusion of woke language policing.

That’s called “lingua nihilo” -- the language of nothing...

And it ought tell the “woke” that it’s time to wake up to reality.