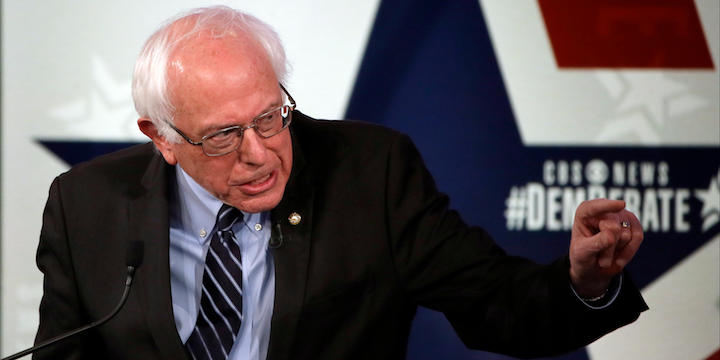 In fact, climate change is directly related to the growth of terrorism. And if we do not get our act together and listen to what the scientists say, you're gonna see countries all over the world-- this is what the C.I.A. says, they're gonna be struggling over limited amounts of water, limited amounts of land to grow their crops. And you're gonna see all kinds of international conflict.

Bernie even doubled-down on Sunday's Face The Nation:

The self-proclaimed Democratic socialist said on Sunday that the attack on Paris is an early example of this phenomenon playing out.

“Well what happens in, say, Syria… is that when you have drought, when people can’t grow their crops, they’re going to migrate into cities,” Sanders said.

“And when people migrate into cities and they don’t have jobs, there’s going to be a lot more instability, a lot more unemployment, and people will be subject to the types of propaganda that al Qaeda and ISIS are using right now,” he added.

At first glance, Sanders' claim may bring people relief, since they no longer have to worry about radical Islam. But, Bernie is also suggesting the terrorism threat is much larger than originally thought. After all, if climate change is causing Islamists to become terrorists, then how long before it radicalizes people of other faiths?

If Sanders is correct, how long before the Little Sisters of the Poor stop their service to indigent seniors, put on bomb belts and become the "Little Sisters of the big booms?" Using Sanders’ logic, we will soon have young Bar Mitzvah boys running toward concert halls with automatic rifles while their Jewish mothers are behind them screaming "put a sweater on, it's cold outside!"

Will we see the peaceful Dalai Lama showing up in Jerusalem with a knife, stabbing every Israeli he can find?

Sanders' global warming theory appears to solve some world problems. Let's face it: the Middle East two-state solution is dead. If Israel wants to end Palestinian terrorism, all they have to do is give them some water and make sure every home in the Judea, Samaria and Gaza has a good, energy-efficient air conditioner. And not just the Israelis -- the same solution could be used by the Russians putting down the radical Islamist revolt in Chechnya.

The Vermont Socialist's claim even helps President Obama close Guantanamo Bay. Those guys aren't terrorists; they are simply people who are sweating because of the unusually hot weather and they need some water to drink.

Sadly, though, for liberals, Bernie Sanders give them one less reason to blame George W. Bush. After all, how can they blame Bush for ISIS if it was created by climate change?

So, if we forget about the radicalized nuns, the terrorist Bar Mitzvah boys, and the fact that it has no connection to the truth, Bernie Sanders' theory that climate change causes terrorism is not a bad thing.