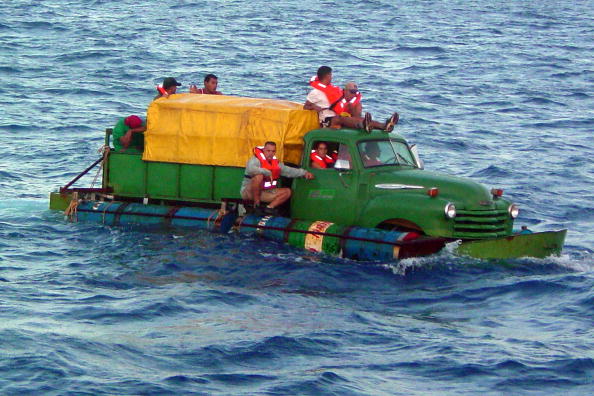 While the vast majority of illegal border crossings remain concentrated at the Southwest U.S. border between the United States and Mexico, Customs and Border Protection is now warning of an escalating situation on another border front to the east: Florida.

“U.S. Border Patrol has observed a steady increase in maritime illegal immigration and drug-smuggling attempts over the past year up and down Florida’s coastline,” CBP warned in a press release issued late last week.

The immigration agency reported it apprehended 56 illegal aliens from Cuba last week alone in a “string of landings" representing a significant several-day spike for that particular sector. CBP notes that after undocumented persons are apprehended along the Florida coastline, they are admitted into the United States to await their day in court:

After admissibility processing at a Border Patrol station, Cuban nationals will receive a Notice to Appear (NTA) before an Immigration Judge, for further proceedings under the Cuban Migration Agreement of 1995 and the Cuban Adjustment Act of 1966.

According to CBP, agents with the Border Patrol Miami Sector alone apprehended 1,752 undocumented migrants between the ports of entry in FY2015. Only 155 cases – just under nine percent – were accepted for prosecution.

In part thanks to the Cuban Adjustment Act, a 1960s-era migration law that sought to give Cubans a sanctuary from an oppressive Communist government, illegal Cuban migration has been a steadily rising problem over the past few years. While the alarming spike is often overshadowed by the larger immigration crisis stemming from Central American nations, the Center for Immigration Studies reported 46,635 illegal aliens from Cuba arrived in the United States unlawfully between Oct. 1 of last year and July 31, surpassing last year’s overall record of 43,154. And though some were apprehended along the Florida coastline, the vast majority of Cubans made their way through Central America and Mexico mixed in with the flood of undocumented immigrants streaming through that pipeline from other Central American nations.

These numbers represent a huge spike in illegal Cuba-to-U.S. migration, CIS stated, pointing out that only 24,277 Cubans illegally immigrated to the United States in 2014. That same year, CIS reports the United States deported only 23 Cubans, 15 of whom were criminals.

CIS also noted that according to federal law, which favors Cuban migrants without visas over those from other Latin American countries, illegal aliens who arrive from Cuba are automatically granted social security numbers, work permits and access to refugee benefits and welfare, including food stamps, cash assistance and Medicaid.