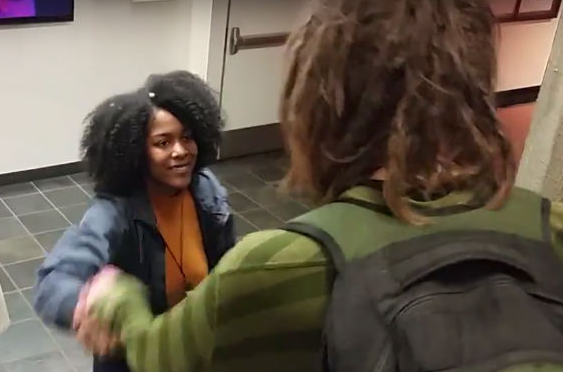 In her first statement since getting caught on camera attacking a white man over “cultural appropriation,” Bonita Tindle blamed the “White male” who recorded the video for unfairly depicting her as an “Angry Black Woman.”

In a YouTube video that went viral in March, Tindle was captured yelling at fellow San Francisco State University student Cory Goldstein over his dreadlocked hairstyle, claiming it was part of “her” culture. She’s seen trying to stop Goldstein from leaving the altercation by putting her hands on him to shove him.

In her statement, Tindle said she was “triggered” by seeing “White male” Goldstein sporting dreadlocks.

Tindle wrote, “My intention was to collegially provoke thought within the man to critically think about his dreads and the racial implications it has as a non-Black person.” Tindle claims the video doesn’t capture her sentiments because it was recorded and edited by a “White male”:

What was recorded was chopped and edited by the White male who captured part of the event on his cell phone. The White male student’s motivation is suspect in that it does not come as an objective point of view, by his own divisive word choice of 'assault' (in the title of the video when posted), in order to incite controversy by framing me as the stereotype of the ‘Angry Black Woman’ and the man in the video as a fragile white victim. He selectively edits only a portion of the encounter that contrives to cast an impression of unprovoked aggression on my part.

According to Tindle, the conversation was “intended to be a learned opportunity.”

“The male had the opportunity to try to explain to me how I should think about my space and existence as a Black person. He dismissed any consideration that I was making a valid point about White appropriation of Black culture,” she said.

Tindle wrote, as a response to the video, she has had to move out of her home due to death threats and rape threats.