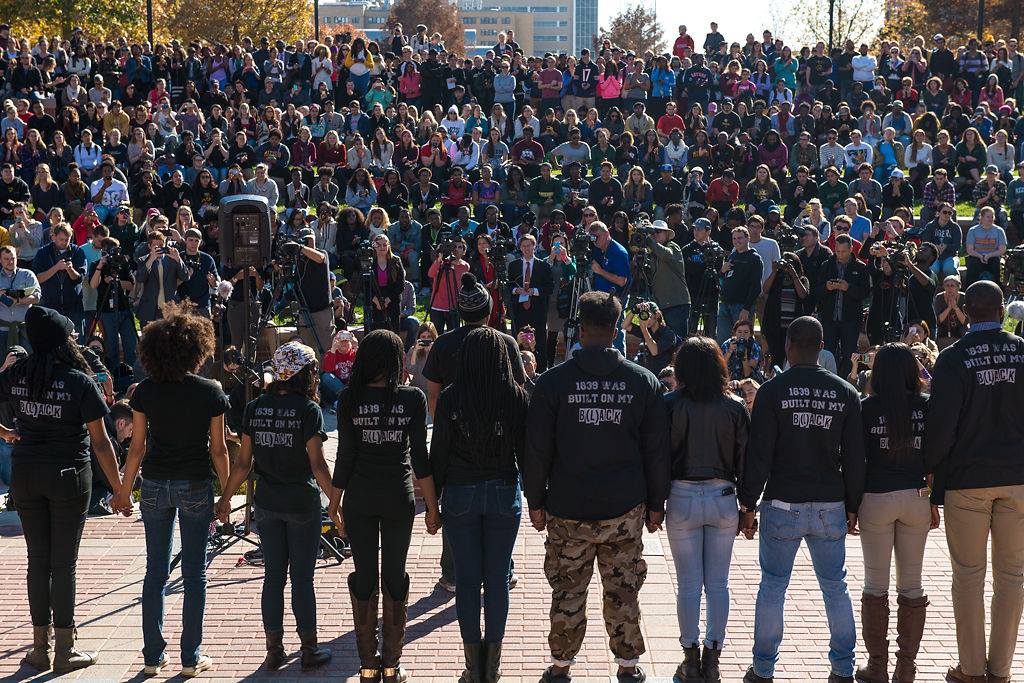 (Disclaimer: MRCTV linked to a Facebook event that has since been removed. An archive of the event can be viewed here.)

An organized protest at Cornell University supporting racial equality has been canceled after a black student group complained about the “lack of people of color in the planning and attendance” of the event, which appears to have been organized by a white student.

The group also stated that “although” the members appreciate “the solidarity and interest of our allies,” the organization would like to address prejudice “in [their] own way.” They then suggested that individuals who would like to show support for black causes should ask in advance for the organization’s approval.

Thursday morning, a Facebook event was created for a #ConcernedStudent1950 protest that would take place on Friday at noon. People immediately expressed outrage at the event.

The event creator, who appears to be a white man on his Facebook profile, was accused of “mocking the struggles of our communities” and “creating an event to promote himself.”

Some Facebook commenters called the event creator a “troll.”

“Are you f**king kidding me? Being an ally is not about starting events because *now* it's actual racism — racism takes on different forms, such as through microaggressions, cultural appropriation, people wearing PoC caricatures for Halloween; bull sh*t that ultimately ‘others’ us that you and so many other folxs poked fun at.”

Muñoz went on to claim the event creator has posted “classist sh*t” and “use[s] humor to dilute our pain.” She called the event a “complete mockery.”

Muñoz requested the student group Black Students United at Cornell University post on the page and cancel the event.

The organization continued, “While we appreciate the solidarity and interest of our allies across campus, we would like to be able to address prejudice on this campus and campuses like it in our own way.”

Black Students United at Cornell University noted they would like individuals to ask their permission before creating events.

“In the future, please ask how you can support us before organizing on your own. With that in mind, we would appreciate the cancellation [sic] of this event.” 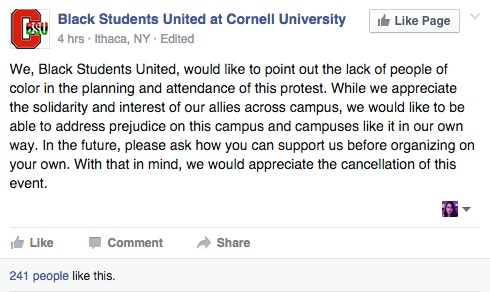 In response to the comment by Black Students United at Cornell University, the event creator posted an update canceling the event. He wrote, “Thank you for calling me out on my ignorance.” 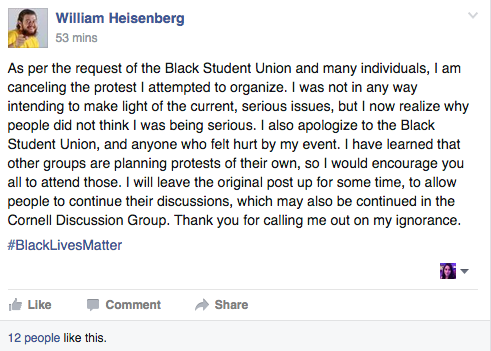