A black mother in North Carolina is currently ripping her local school district a new one after her son came home with a school-issued pamphlet detailing “white privilege.”

Amber Pabon, a resident of Raleigh, said her son came home from his second grade class at Hunter Magnet Elementary asking her if white people were “better” than him. She then found the flier he’d been given at school, which stated that white people were overwhelmingly represented in society and that the disparity makes it harder for minorities to succeed.

“White dominates the culture, from our government to our professions to our media. Yet – for the most part, for too many white Americans – whiteness remains unexamined,” the flier states, according to the photo Pabon posted.

The paper goes on to list everything “wrong” about whiteness in America, including statements like “Congress: 90% white” and “People who decide which TV shows are 92% white.” 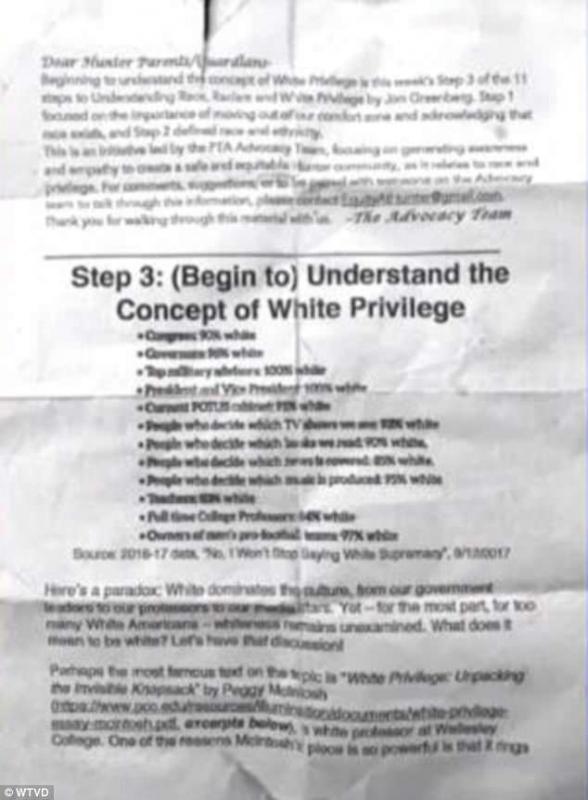 Pabon says her son came home with the paper and asked her, “Mommy, are white people better than me?”

She says lessons about racism are something that should be left up to the parent to teach their child, not pushed on them at school.

"He's eight years old," Pabon told ABC11. "What does he need to know about racism or white privilege?"

The school says the pamphlets were created by the school’s PTA's advocacy team, which started sending out race-related information during Black History Month. The school maintains the fliers were part of some 11-step guide meant for the parents, not the students – because, as anyone knows, a child would never read what he’s been handed to take to his mom.

So congratulations, Hunter Elementary. You’ve taken a little boy who probably hadn’t thought twice about his skin color and made him question whether he was inherently worth less than his white friends, all because of your twisted obsession with race.