Black Conservative Leader Blasts CNN After Being Cut Off On-Air

Unless you’re Don Lemon, and therefore part of the problem, you’d be hard pressed to convince people that the media aren't biased.

In CNN’s coverage of the pro-Trump “Mother of All Rallies” event on the National Mall in Washington, D.C.,e on Saturday, CNN Washington correspondent Ryan Nobles was going around interviewing different Trump supporters. But, one man in particular didn’t exactly fit CNN’s narrative of racial division and Trump supporters being white supremacists.

One of the attendees Diante Johnson, the Founder and CEO of the Black Conservative Federation (BCF), was asked a question by Nobles:

“I’ve seen some shirts here today though. I think one shirt that said 'No White Guilt,' things like that,” Nobles said to Johnson. “I mean, there have been some messages that might not be that open to folks from diverse perspectives. What would your message be to folks like that?”

Here was Johnson’s response before he was cut off:

When it comes to ‘no white guilt,’ I agree with that. I actually just made a post about it on my page and a video about it. There are some White Americans that feel guilty for what their ancestors did, you know, this and that, and the thing about it is, they shouldn’t have to feel guilty, this is America...

That was when CNN cut the rest of Johnson’s response.

Here is the CNN clip in question:

Johnson didn’t take the blatant disrespect showed to him by CNN, and the clear media bias, lying down. Johnson responded to the slight on BCF's Facebook page through a written statement.

“When asked about white guilt, CNN did not want their viewers to hear a black man who knows he is free in this amazing country,” Johnson said in a statement.

Johnson also said that CNN “does not want their viewers to know that there are many black Americans who espouse conservative principles and reject the theory of racial victimhood.”

Here is the full statement: 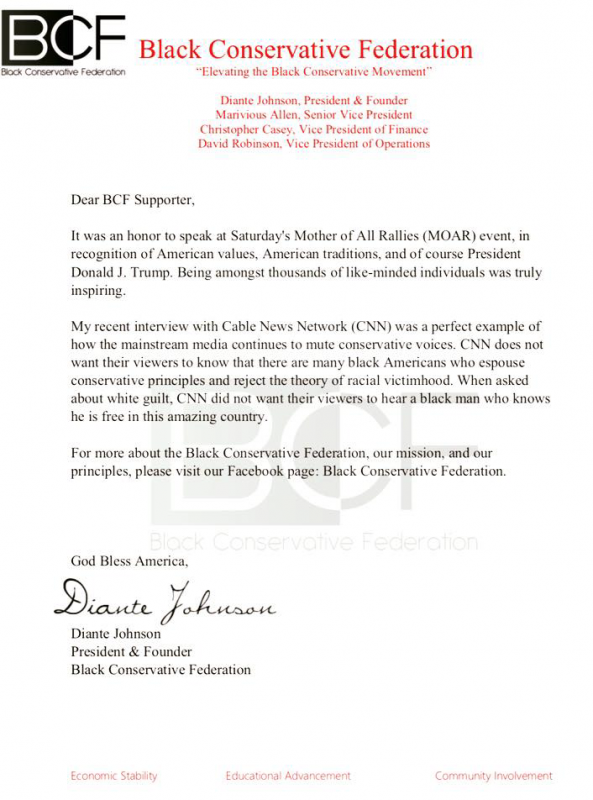 CNN’s Don Lemon might not think there’s media bias, but Diante Johnson certainly does, and this incident goes further to prove that point.

Mother of All Rallies