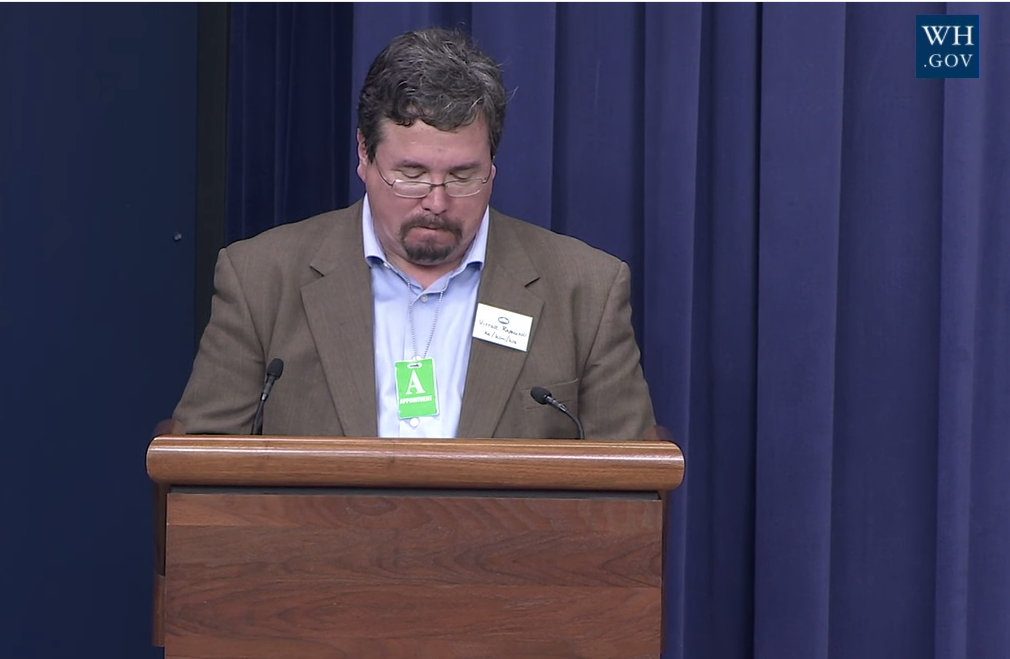 No, this is not a headline from “The Onion.”

At the White House’s Bisexual Community Briefing that took place on Sept. 26 to honor “Bisexual Awareness Week,” one of the speakers called upon a Native American deity to look over the presentation.

Sporting a “he/him/his” pronoun badge, BiNet organizer Victor Raymond introduced himself as “as an out bisexual two-spirit man” and a member of the Rosebud Sioux tribe. (For those who are unfamiliar, being a “two-spirit” means you identify both as a male and a female spirit, which technically means Raymond misgendered himself when he called himself a man and chose to go by “he/him/his” pronouns.)

“Today, we are here at the White House, and I call upon the ancestors to witness our presence, and for the Great Spirit, Wakan Tanka, to guide our words and thoughts so that we can speak true and strong,” he said.

Raymond continued, saying, “As bisexual people, we have always been here. Amongst my people, the Lakota Sioux, two-spirit people, bisexual, gay, lesbian people, as they are now known, transgender people, were given the gift of medicine to share with the members of the tribe. It was Wanka, a mystery. But it was proper and it was part of our community.”

“Now we are faced with new times, when bisexual people, two-spirit people, others that we now know as LGBQ, are not recognized and our place in the community questioned. But bi and trans people — and particularly now amongst many tribes and communities, by bisexual, transgender, Native American women in particular — face challenge and discrimination. We stand with them and with all people whose place is no longer recognized.”

Raymond also said members of the bisexual community need to oppose the Dakota Access Pipeline and support Black Lives Matter as part of standing for “other communities.”

The Bisexual Community Briefing, which was billed as a briefing to focus on “policy and cultural issues of significance for the American bisexual community,” also included musical performances, spoken word poetry, and a round-table discussion.