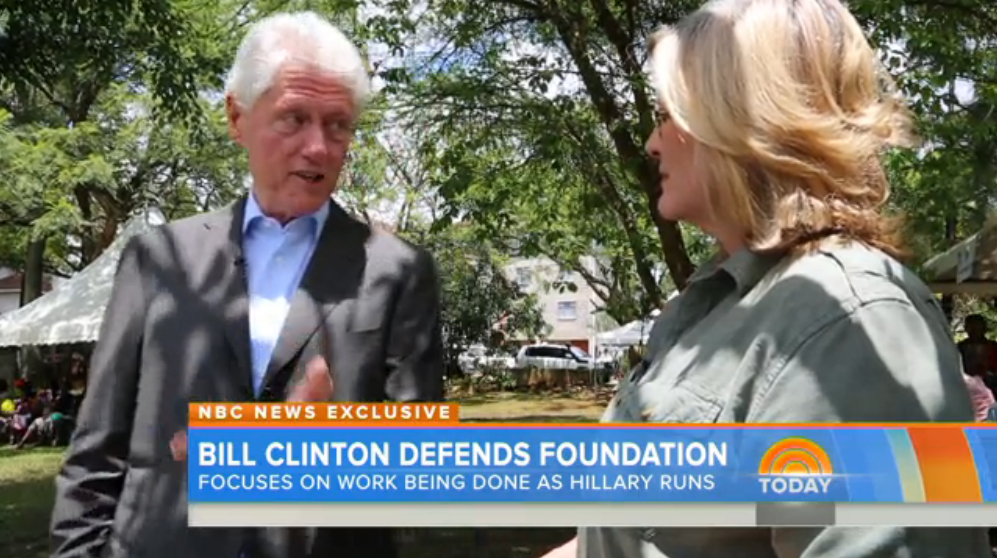 In an interview with NBC News, former president Bill Clinton defended taking millions in foreign cash for his foundation.

He argued that the Clinton Foundation has “never done anything knowingly inappropriate” with the foreign money.

“There is no doubt in my mind that we have never done anything knowingly inappropriate in terms of taking money to influence any kind of American government policy,” he said. “That just hasn’t happened.”

Mr. Clinton noted that, if his wife Hillary is elected President in 2016, he would consider stepping down as head of the charity.

“If it's the right thing to do, I will," he said. "I might if I were asked to do something in the public interest that I had an obligation to do. Or I might take less of an executive role.”

“But we’ll cross that bridge when we come to it,” Clinton added.

One thing he won’t stop doing if Mrs. Clinton is elected is giving speeches. He justified charging $500,000 for his speeches as a necessity to pay the bills.

“I gotta pay our bills,” Clinton said. “And I also give a lot of it to the foundation every year.”

He insisted that the high price point is reasonable because he spends hours researching and practicing:

“I work hard on this. I spend a couple of hours a day just doing the research,” Clinton said. “People like to hear me speak.”

“We do our best to vet them,” Clinton said of the groups that pay for his talks. “And I have turned down a lot of them. If I think there’s something wrong with it, I don’t take it.”

Similarly, he said that he has, on occasion, turned down money offered to their charity:

On the controversy surrounding his wife and their foundation's undisclosed donations from foreign governments, Bill Clinton said he trusts that the American people will "figure it out" that critics are simply practicing “politics” and “selective nondisclosure.”

“People should draw their own conclusions. I’m not in politics,” the former president said.

“All I’m saying is the idea that there’s one set of rules for us and another set for everybody else is true.”

“The people who have attacked the foundation have practiced selective nondisclosure,” Clinton argued.

“I really trust the American people to figure it out. I always have. And so far, I haven’t been disappointed.”

Unapologetic for their wealth, their charity taking in foreign donations, and their charging half a million in fees per speech, Clinton defended his and his wife's work as impactful and life-saving:

“The lives we save and the impact we’ve had, I’m proud of it,” Bill Clinton said.

To watch the interview, check out the video below.

I gotta pay our bills