One of the key points about collectivism I stress to students is the fact that every form of collectivism, be it “socialism”, “communism”, or “fascism” -- in fact, any form of “statism” – cannot work economically because it runs into what is known as the “calculation problem”. That’s the ever-present reality that by removing private property ownership, to whatever degree, and replacing it with political commands, the individual valuation process is destroyed, and real prices cannot be applied to resources. As a result, the more collectivist a system is, the less it will be able to respond to the demands of the population.

And since Bernie Sanders is a socialist, we already knew he had no inkling about calculation problems, but it he just acknowledged his lack of math ability on Twitter – and got plenty of the mockery he so rightly deserved.

As Caleb Shumate writes for The Libertarian Republic, on Saturday, April 27, ol’ Colonel Sanders revealed some more of his secret recipe for politics, trying to push his clichéd “David vs. Goliath” class envy line again, and this time, jokingly admitting that he can’t do math.

‘I may not be a great mathematician, but I did learn in elementary school that 99% is a hell of a lot more than 1%. #OrganizeWithBernie,’ Sanders tweeted. In what seems to have been an attempt to entice others to “feel the Bern,” the only one who got burned was Senator Sanders in his own Twitter feed as many Twitter users roasted his ignorance of basic economics.

And how well they roasted him… 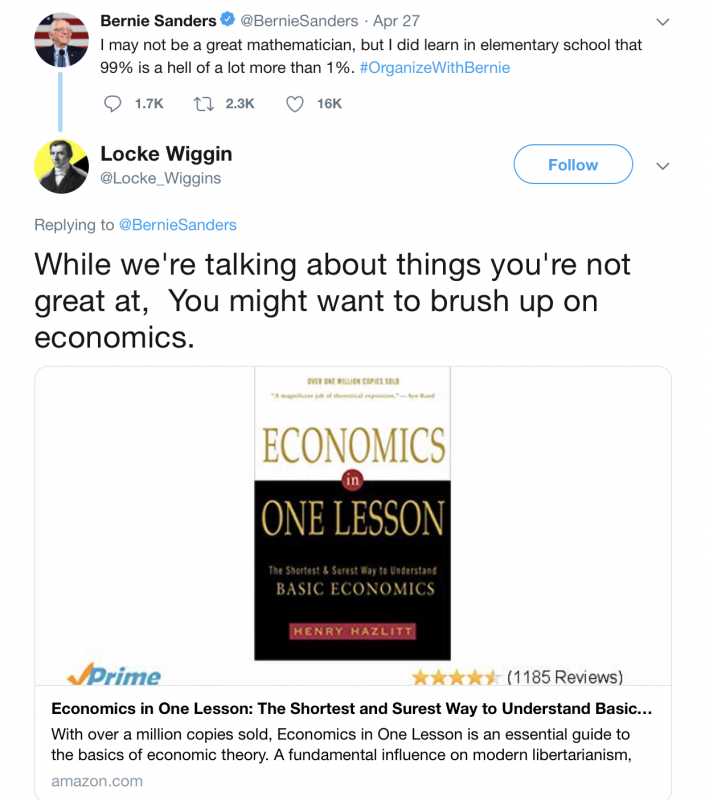 Locke Wiggins Tweeted a link to the classic book “Economics in One Lesson” by legend Henry Hazlitt (who modeled his book on Bastiat’s phenomenally insightful, effortlessly readable work). And Wiggins wrote:

While we’re talking about things you’re not great at, you might want to brush up on economics.

Chicks on The Right offered:

Says the millionaire who not only takes a 175K salary from taxpayers now, but also takes a taxpayer funded pension from his 1980 mayoral days. COMB YOUR FREAKING HAIR, socialist weirdo. 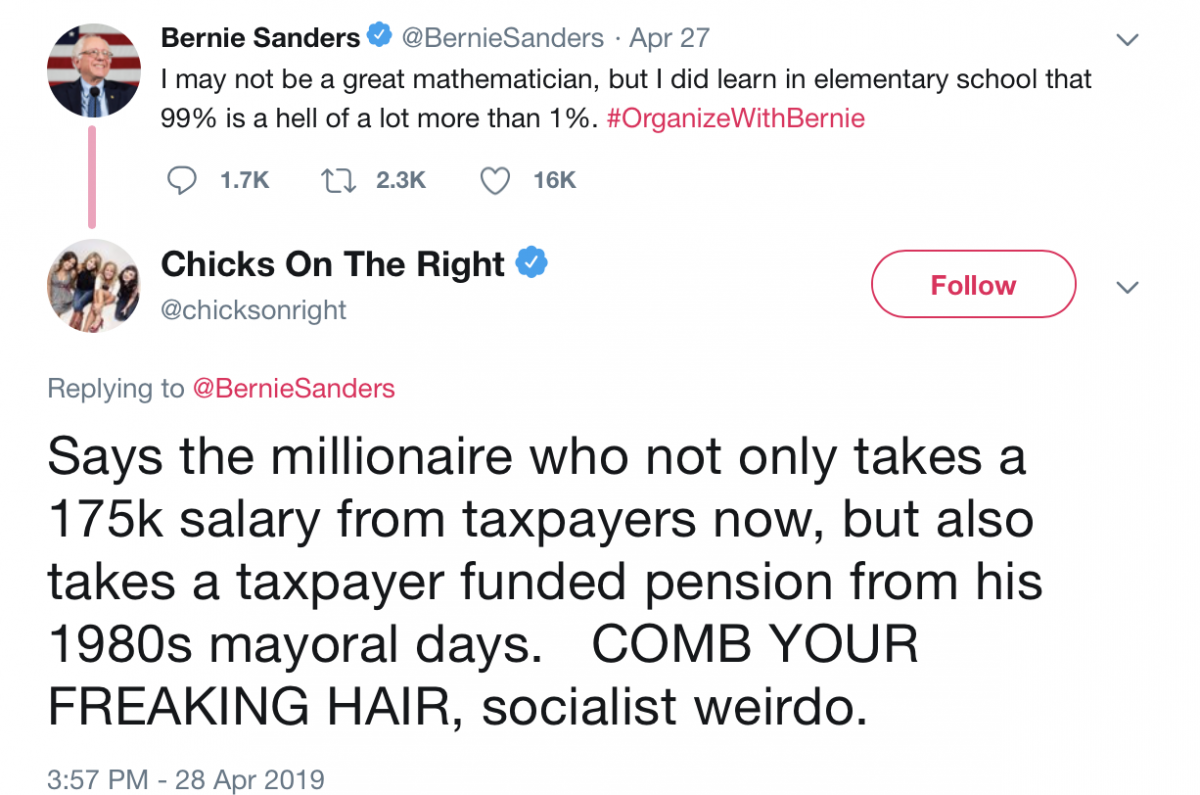 And, of course, a bunch of lefties defended the indefensible by jabbering about “making the upper class pay their fair share”.

Which prompts us to observe two major points, lessons, one might say, when it comes to this whole “class envy” thing.

First, as a matter of history and lexicography, the US has no “classes”. A curious leftist might ask why, why is one of his favorite Marxist holdovers not applicable in the US?

Because the US never had a feudal system.

“Class” is derived from feudal peerage, the system whereby monarchs bestowed special privileges onto those whom the royal favored – relatives, descendants, knights who worked extra hard to defend the realm. Those landed gentry were the “Upper Class” and ruled over the serfs, who were the “Lower Class”. India fostered a similar class system in its castes.

But the United States never had any royalty, therefore no royal peerage system, hence, no “class system”. To back that up, ask a politician to economically define for you what the “Upper Class” and “Lower Class” are. You’ll get a different answer from every politician, if you even get an answer.

The second major point about Bernie’s class envy strategy is that it not only uses the same emotional trick Marx tried to employ in his abysmally written “Communist Manifesto” (by the way, Marx calls patriarchal relations “idyllic” within the first few pages, so you can mention that to an Antifa member sometime), it utterly misconstrues what the “1%” do, on the level of tax payments, on the level of business growth and employment, and on the level of consumer satisfaction.

Bernie doesn’t like to discuss this, but if one wants to continue talking about the oxymoron of “tax fairness” (when is theft fair?), one might want to bother researching who actually pays the bulk of income taxes in the US.

In case Bernie can’t do the math for the people who are in the bottom 50%, that equals 3.04% of all income taxes, and many in families who earn below 40K a year receive federal redistribution of wealth via the tax code. Many single people who earn less than 25K a year can also get cash handed to them via the tax code.

Not only that, Bernie’s excoriation of the “evil” 1% overlooks something mighty significant.

In a free market, people only earn more by pleasing customers. The very fact that someone is a high earner means that he or she offered things or services to people that those people valued, that consumers decided helped better their lives. Their very positions as wealthy people means that other people chose to help make them wealthy be buying what they had to offer. They’ve already helped people.

And they will continue to do so. Another economics lesson Bernie never learned while he was praising Venezuela’s socialism and the Soviet Union is that the top earners are also the people with the expendable capital that they can use to invest at natural interest rates (not fake ones invented by the monopoly central bank or dictated by the government) to help start new business ventures and invest in expanding existing ventures. These are people who have proven they have business savvy. As opposed to Bernie, who has never participated in the real business world, the 1% is comprised of people many of whom have already shown they know what makes for business success. Rather than having politicians steer their money away from them, we should want them to use it as they see fit.

And there’s an ethical problem with Bernie’s position, one that lies at the heart of Marx’s twisted world view. The idea is that private property ownership is bad, that since it can lead to some people becoming very wealthy, that money should be taken, and the ownership of private property should be abolished.

But not only do rich people working in a free market become rich by serving consumers – who can always withhold their money and have the final say – they have a right to their property.  In fact, the very concept of property ownership stems from the axiomatic principle of self-ownership, and both Bernie and Marx negate that idea, replacing it with the idea that the state has a claim on you and your progeny, that you are a slave.

It would be a different matter if Bernie were decrying cronyism, the system of mercantilism Adam Smith criticized in 1776 in his book, “The Wealth of Nations”, wherein politicians hand out favors to special business interests in return for those business interests supporting the politicians. While Bernie deserves some credit for opposing the (unconstitutional) Bush-era “Emergency Economic Stabilization Act” of 2008, “Troubled Asset Relief Program” (TARP), he has no claim to any moral high ground, because he favored bailouts for automotive special interests (read: he wanted to play nice with auto unions).

And, finally, an expanding pie helps all. Even if “the 1%” earn a lot more than “the 99%”, all of them have done better in a freer market US that leaves the earned cash in the hands of those who earned it. This is especially true when looking at inventions and ideas building on ideas. The poorest in the US live with more amenities than most people in the Third World nations of Africa.

Perhaps ThePeckhamPost put it best when he responded to Bernie with this Tweet:

This is the math of tyranny. 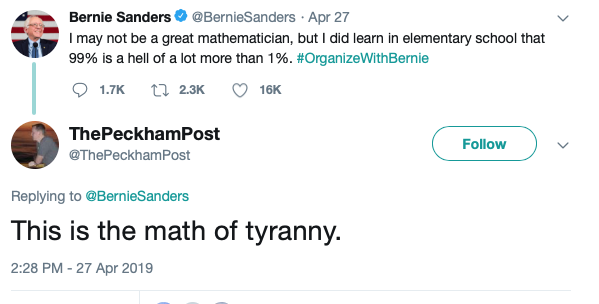